Raped 45 years ago, woman returns to bring attacker to justice — for other woman's murder

Now 75, wheelchair-bound and in shackles, even after 45 years she recognized him, she told the court. 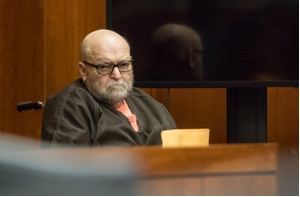 Editor's note: This article contains graphic descriptions of crime that some readers may find disturbing.

For more than four decades, "Diane Doe" has tried to bury memories of the rape she survived as a teenager in her parents' Palo Alto home.

Now 62, on Tuesday in a Santa Clara County courtroom, she came face to face with the man responsible. But Doe wasn't facing down John Arthur Getreu for his crime against her. Instead, she had made the trip from her out-of-state country home to try to testify in the case of another woman's murder, a woman she never even knew.

Looking at her assailant, now 75, wheelchair-bound and in shackles, even after 45 years she recognized him, she told the court.

Now the pieces she fought so hard to bury were coming back, she said. She had survived his hand around her throat, a squeeze that could have choked the life from her.

"This is the nightmare that has lasted for years. Not being able to scream out, not being able to breathe," she said. She didn't know why she survived the attack, she said during an interview with the Weekly last year.

Leslie Marie Perlov, the woman Getreu is charged with killing in 1973 in the Stanford foothills, was found strangled and partially clothed. Her undergarments and stockings were crammed into her throat, prosecutors said. When they asked her to testify in Perlov's case, Doe agreed to face him again to try to bring him to justice.

She was an 18-year-old Scout Explorer in January 1975. Her parents were on a vacation when she and three boys in their troop decided to go to a midnight movie and then buy pizza. Their parents would only allow a late-night outing if they were accompanied by an adult, and one of the boys had suggested they invite Getreu. He was their troop leader, along with his then-wife, Sue.

After the movie, around 3-3:30 a.m., Doe drove the boys and Getreu to their respective homes. Returning to her residence, Doe said, she heard a knock on the door and opened it to find Getreu, who said the other boys were still wide awake and were planning to meet at her house.

The boys never came, however. As they waited, Getreu began to question her about her relationship with one of the boys and talked about her experiences with kissing.

"That was as far as I had ever gone with a boy," she said.

Getreu wanted to know about her best friend and other boys in the troop, asking similar questions about their relationships.

"I was getting uncomfortable," she told the court on Tuesday.

She let Getreu give her two light taps on the buttocks over his knee. When she got up, he began to kiss her.

"Think of Sue," she recalled telling Getreu. "Think of your wife."

Getreu told her they were having troubles and weren't getting along. He continued to kiss her and gently pushed her back onto the sofa. With her younger brother asleep in the bedroom, she protested and tried to get up, but he grabbed her by the throat and began to tighten his grip. He told her to be quiet and said he could hurt her, she recalled.

With Getreu on top of her, undressing her below the waist and eventually raping her, most of the time he kept one hand firmly around her throat, she testified. As she struggled against him, she recalled that the boys in their troop had talked him up as "an amazing leader." They often said he was very strong; he had taken martial arts.

"I stopped resisting," she said.

After he left, Doe went to a friend's house where she told the friend and the friend's parents about the rape. Getreu was arrested the same day and pleaded not guilty to charges of sexual perversion and rape by threat of great bodily harm, according to 1975 court documents. The court later added a charge of statutory rape, requested by prosecutors, after Getreu's attorney asked for all charges to be dismissed.

In June 1975, Getreu agreed to a plea deal and admitted to the statutory rape. He received a six-month sentence in county jail, a $200 fine and two years of probation but served only 30 days in jail on weekends, according to court documents.

With her voice shaking, Doe said she was still bringing forth repressed memories. As her story spilled out, she began to cry.

"I lost all my friends. I changed schools. The '70s were rough, and I didn't want to subject myself again" to the experiences she had repressed.

In court on Tuesday, Getreu did not show any emotion. He claims he didn't have contact with Leslie Perlov, who he allegedly strangled nearly 47 years ago, but his statements appeared to be contradicted by DNA evidence from under her fingernails. Perlov's body was found Feb. 16, 1973, under an oak tree near what is now "The Dish" in the Stanford foothills.

During Tuesday's preliminary hearing at the Santa Clara County Hall of Justice in San Jose, Santa Clara County sheriff's investigators described how they reopened the cold case in November 2016 and sent clippings taken from Perlov's fingernails to the sheriff's office's crime lab to look for DNA evidence. Kevin Kellogg, a lab criminalist, testified that he extracted DNA from two individuals: Perlov and an unidentified male.

The male's DNA was a significant finding, Kellogg said. It's not that common to find another person's DNA as a "major contributor" under a victim's fingernails; DNA from someone other than the victim is found less than 20% of the time, he said.

The presence of another person's DNA which in this case matched Getreu can't be explained "by a handshake or a pat on the back," Kellogg said. It would have been from physical contact with skin cells or bodily fluids, such as semen, he said.

"I would not expect it from a significant other or from consensual relations," he said.

Under ordinary circumstances, a dominant DNA profile from another individual other than the victim would also tend to degrade within 24 hours because of handwashing or nail grooming, he said, citing a 2007 study published in the academic journal Forensic Science International. So the contact would have happened within 24 hours of Perlov's death he said.

After Kellogg established the DNA profiles for Perlov and the unknown male, investigators identified Getreu as a potential suspect. Investigators have previously stated they used an outside firm to seek a match through familial DNA databases.

To get Getreu's DNA, Santa Clara County sheriff's Detective Noe Cortez said he and another detective followed the Hayward resident and his wife and retrieved disposable coffee cups they threw into a trash bin. DNA tests on Getreu's cup and a cheek swab taken from him after his arrest matched the DNA found under Perlov's nails, Kellogg testified.

Getreu also made a potentially significant statement during questioning, Cortez said. He told the detective he did not know Perlov and had not had sexual relations with her. Getreu, a former Stanford Hospital cardiac technician, said he had never been in the hills where Perlov was found.

When shown a photo of the 21-year-old victim, however, Getreu said she was a Stanford graduate, Cortez testified.

At Tuesday's hearing, Presiding Judge Linda R. Clark ruled there was enough evidence to hold Getreu for trial on charges of murder and charge of murder with the intent of perpetrating a rape or sexual assault.

Getreu pleaded not guilty to the charges in December. He remains in the county's Main Jail in San Jose without bail. His next court date is Feb. 18, when he will appear for arraignment on the charges.

Getreu is also facing a murder charge in San Mateo County for the 1974 strangulation death of Janet Ann Taylor, whose body was found on Sand Hill Road in a ditch on Stanford University property. He pleaded not guilty to Taylor's murder in June 2019. A judge in San Mateo County Superior Court last December found there was enough evidence to hold him for trial.

He was also convicted of rape and murder in 1964 for the 1963 rape and murder of Margaret Williams, a teenager in Germany, where their fathers were stationed on a military base, according to news stories from that time. Getreu, who was 18, was sentenced to 10 years in prison. He returned to the United States in the late 1960s, living in Ft. Bragg, North Carolina, before moving to the San Francisco Bay Area in 1969 or 1970, according to San Mateo County sheriff's detectives.

California 28 September 2020
More than 30 deputies have been referred for possible charges in an evidence booking scandal that centers on alleged false police reports about evidence that was either booked late or never booked at ...
Read more

California 28 September 2020
She took the suspect's debit card -- which was never booked into evidence  September 9, 2020 An Orange County sheriff's deputy is facing a felony charge for allegedly taking a debit card from a s...
Read more

Northeast 25 September 2020
Damon was 20 years old at the time of Burke's murder. Enter Article DATE HERE BELFAST, Maine — A Stockton Springs man was been arrested and indicted on Tuesday for a murder that has been a cold c...
Read more