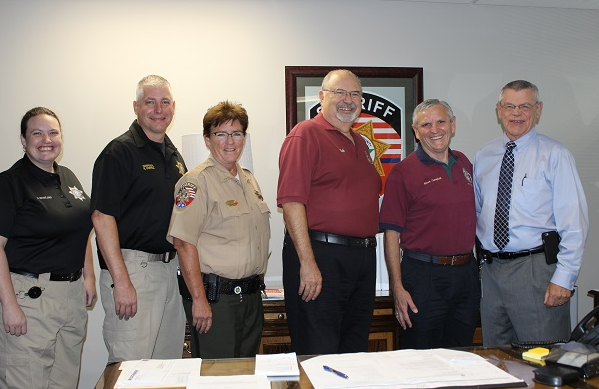 The International Association for Property and Evidence, Inc. (IAPE) announced today (Wednesday) that the Property and Evidence Section of the Rutherford County Sheriff's Office has been awarded full accreditation status as of September 15, 2017. The Rutherford County Sheriff's Office is one of the few law enforcement agencies to achieve this designation, and the only agency in Tennessee that has completed the rigorous IAPE screening process and has been issued accreditation.

"The citizens of Rutherford County should be justifiably proud of the efforts of Sheriff Michael Fitzhugh and his staff for the outstanding work that they are doing in the area of the preservation, storage, accountability, security and disposal of property and evidence by their agency," said IAPE Accreditation Director Steve Campbell.

The award of the IAPE Accreditation was the result of a multi-step process that included the assessment of the Rutherford County Sheriff's Office's written directives and policies, an in-depth review of the processes and procedures used by the department regarding property and evidence that are submitted to or seized by the agency, and an on-site visit by the IAPE Accreditation Team to observe the operations. All of the aspects of the assessment are based upon the Professional Standards that have been promulgated by the IAPE.

Sheriff Mike Fitzhugh acknowledged the outstanding efforts of Corporal Dowell and Deputy Heather Rowland who manage the Property and Evidence Unit of his department, and his command staff.

IAPE (www.iape.org), which was founded in 1993, is the world's largest professional association of individuals whose responsibilities include the storage of items of property and/or criminal evidence. IAPE is a chartered IRS 501.c.3, not-for-profit association whose international membership exceeds four thousand individuals. IAPE's core mission is to provide training to law enforcement agencies in the best practices and professional standards related to property and evidence. More than 25,000 students have attended the two-day IAPE "Property and Evidence Management" class. Also, many have completed the recently introduced online, on-demand version of that class. Over two thousand of its members have completed the experience, training, and testing necessary to achieve the status of Certified Property and Evidence Specialist (CPES).

The International Association for Property and Evidence, Inc. (IAPE) announced today (Wednesday) that the Property and Evidence Section of the Rutherford County Sheriff's Office has been awarded full accreditation status as of September 15, 2017.
http://www.wgnsradio.com/rutherford-county-sheriff-s-office-achieves-iape-accreditation-cms-41804
Tweet
How do you feel about this post?
Happy (0)
Love (0)
Surprised (0)
Sad (0)
Angry (0)
Tags:
altered evidence assault  kits Chain of Custody Big Three: IAPE
FBI evidence teams provide expertise to local law ...
Fentanyl-detecting laser could save lives, help of...
Comment for this post has been locked by admin.