Council members want police to test nearly 2,000 kits — used to gather
and preserve evidence in rape cases — sitting in the Police Department
evidence room that date back as far as the 1990s. 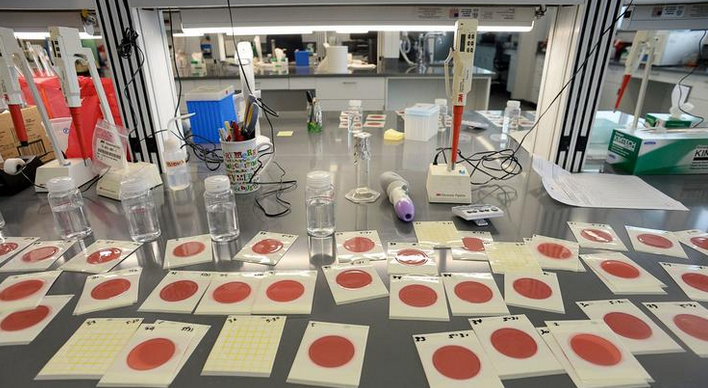 San Diego police say confusion about rape kits has left them with $500,000 set aside to do tests that are highly unlikely to help solve any crimes.

The money was added to the budget last month by the City Council in hopes of solving local sexual assault cases and possibly cold cases in other places, a decision police are calling well-intentioned but misguided.

Council members want police to test nearly 2,000 kits — used to gather and preserve evidence in rape cases — sitting in the Police Department evidence room that date back as far as the 1990s.

"This is a critical thing," Councilman Chris Ward said. "It's been absolutely a disservice to San Diegans who have been through that and have put themselves forward and deserve to have their information tested."

Police say the city's crime lab quickly tests all rape kits taken from victims of sexual assaults in which a stranger is the suspect.

Testing is delayed only for cases in which the suspect is an acquaintance and police say they have a variety of sound reasons not to test the evidence, which consists of hair, saliva, blood and possibly semen taken from victims shortly after alleged attacks.

Those reasons often include the victim deciding not to pursue the case and asking police not to go forward with any testing, said Jennifer Shen, manager of the Police Department's crime lab.

"A lot of the people focused on this issue are really focused on stranger cases," Shen said last week. "In San Diego, all of those are done — there is not a pile of stranger kits waiting for someone to do them."

Another reason to delay testing in acquaintance cases is that they typically come down to whether sex was consensual, not whether it happened, making it unnecessary to establish that sexual contact occurred.

Some argue that it would still be worthwhile to test such kits so that DNA from the suspect could be uploaded to state and federal databases, possibly helping solve crimes elsewhere if the suspect has committed other assaults.

Police say they can't upload DNA to those databases unless there's evidence a crime was committed and they are reasonably certain the DNA profile in the rape kit belongs to the perpetrator of the crime.

The first requirement can't be met without a cooperative victim, officials say, and the second requirement can be hard to meet if the victim had sex around the same time as the attack with a spouse or boyfriend.

"At the end of the day, testing a kit doesn't mean anything — putting the information into the database is what means something," Shen said. "So you could be ordered to test all the kits and you would waste a lot of money but it wouldn't do anything for you. It's spending millions of dollars to say that you did something that gives you nothing."

In addition, police say uploading the DNA of possible suspects when there is no evidence of a crime could lead to a backlash and possible legal action from the American Civil Liberties Union.

Testing of years-old kits has become a more prominent issue in California since the state last year eliminated the statute of limitations for rape in the wake of sexual assault allegations against comedian Bill Cosby.

San Diego police recently had interns evaluate every kit in the evidence room to ensure none had been miscategorized. Shen said they decided a few should be tested, but that no prosecutions have resulted.

Police also recently established a new policy requiring each untested kit to be labeled with the specific reason no testing has been done. That was in response to a 2014 state audit recommending such a change.

Capt. Mike Hastings of the Department's Investigations Division said leaving kits untested often makes much more sense than testing them quickly. He said an example is a woman not feeling right after a night of drinking and wanting to have a kit drawn from her just in case.

Shen also noted that scientists are continually improving DNA testing, making it wise to wait on untested kits in case future technology would provide better results down the road when a potential prosecution seems possible.

When it comes to rape kits that police think should be tested immediately, Shen said her lab has essentially no backlog.

"We at any given time have between five and 20, most of the time it's much closer to five," she said. "We highly prioritize stranger cases and we can get our results out to officers within 48 to 72 hours."

Shen said the best policy is to test kits only when police and prosecutors deem it wise and cost-effective.

It costs about $1,500 to test each kit, so San Diego would need to spend nearly $3 million to test all of the kits in the police evidence room.

The study analyzed 4,763 rape kits in Los Angeles County that got tested over the objections of police as part of a new policy. The testing cost $4.5 million and resulted in two prosecutions, neither of which relied on DNA evidence.

"The forensic testing of all backlogged sexual assault kits is not recommended," the authors of the study concluded. "Before testing, the goals of agencies must be clearly defined, the investigation status of cases determined and agencies must become familiar with the short- and long-term benefits of such testing. For future testing, unsolved stranger cases should be the primary focus."

"CALCASA recognizes that for some survivors, ending the DNA rape kit backlog is meaningful," Emily Austin, director of advocacy programs for the coalition, said last week. "However, in general in California, survivors are not centering this as their priority issue."

She said the coalition has decided to focus more of its resources on preventing sexual violence and helping victims.

"There were definitely agencies throughout the U.S., in various places, where they did not have the resources to be on top of this work and they did find thousands of kits that should have been tested and weren't," she said.

But San Diego is not one of those places, she said.

Police have not decided how to spend the $500,000 the council included in the budget. Shen said one option is buying more advanced equipment that would speed up the testing of rape kits that police deem appropriate for testing.