It is alleged that Lynch stole various items from the Harper Woods Police Department property room between Feb. 4 and Feb. 10. 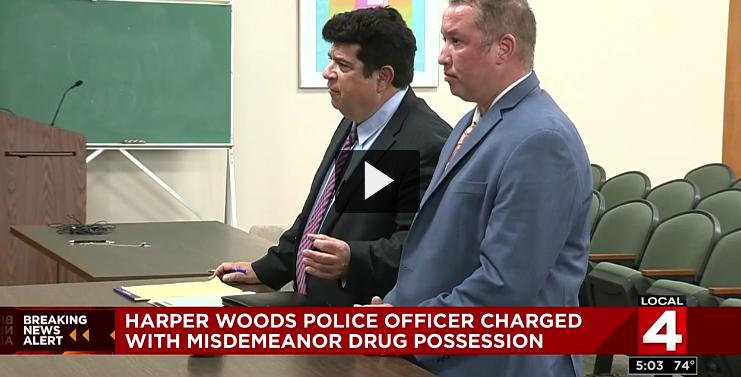 Officer John Biernat was arraigned Friday on a misdemeanor charge of controlled substance use -- narcotic, cocaine or ecstasy.

Biernat is being held on $7,500 bail, and he's not allowed to drink alcohol. He will be drug tested within the next 24 hours and face random tests twice a week. He is not allowed to possess any firearms or dangerous weapons away from his home.

A pretrial hearing is scheduled for Aug. 23. If convicted, Biernat could face up to a year in jail.

Michael Richard Lynch, 37, was charged with misconduct in office, possession of heroin, and six counts of larceny in a building.

He pleaded not guilty.

It is alleged that Lynch stole various items from the Harper Woods Police Department property room between Feb. 4 and Feb. 10.

Lynch was given a $50,000 personal bond and will be drug tested twice a week.

"The top priority of this department is the safety of our community, and maintaining the excellent relationships we have built and the trust you have placed in us. I want to thank everyone who has reached out to us telling us that we still have that trust in spite of recent events. Your confidence in us is essential to continue the significant reductions in crime we are experiencing, and the demonstrated respect we have for each other. The National Night Out and Unity in the Community Walk last week was attended by over 500 people. We take great pride in our privilege to serve you, and we hope to keep building the relationship we have with our residents every day.

"I would also like to thank the media for the fair treatment we r eceived Wednesday, despite the negative circumstances that made it necessary for their coverage of our community. While a police officer charged with a crime is never a positive event, I was given ample time to explain that the activities in question were uncovered by our officers, and we do not tolerate any violations of the law. Most importantly, the focus on the excellent relationship that exists between our police department and our residents was emphasized, and how critical it is to our mission."

Biernat has been suspended from the Harper Woods Department of Public Safety without pay.