But behind the basement evidence room's locked door are boxes piled high to the ceiling, each containing evidence from crimes long gone, evidence that sheriff's office employees are slowly picking through. 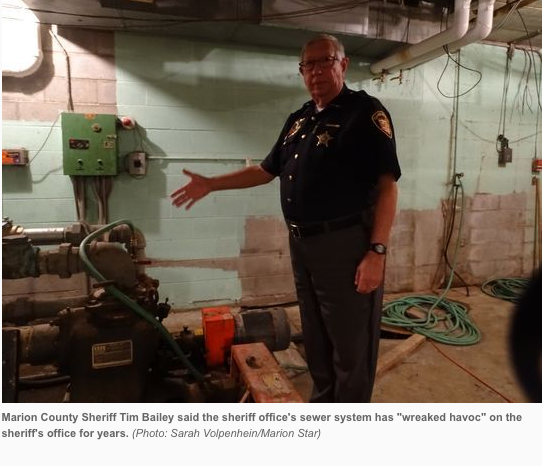 MARION — The sewer system in the Marion County Sheriff's Office has been causing headaches — and not just because of the smell — for decades and is part of what has prompted the sheriff to look into building a new office.

"This is the first time it was bad enough where I sent the staff home for a day or two," said Marion County Sheriff Tim Bailey.

Bailey said the stench swept through the building.

"It was clear up into the lobby, in my office," said Larry Yoder, who registers sex offenders from his office off the lobby.

It was not the first time the sewer system has acted up.

"This has been a problem for 40 years. You just keep putting a Band-Aid on it," Bailey said.

Besides the sewage system backing up, Bailey estimated the building's basement has flooded between 10 and 20 times — whether with rain water or with sewage — during his nearly 13 years as sheriff. He said the sewer system is due for a replacement.

But the problem, he said, has been coming up with the money. When the time comes to prepare the yearly budget and Bailey is asked what his first priority is, he said, the sewer system is not at the top of the list.

"I'd say, 'I want more road deputies. And I'd like a new lift station,'" he said, referring to the system that moves sewage from a well in the basement up to sewer lines below the street.

"It seems like we're all on the same page that this old building is problematic," Bailey said. "Do you keep repairing it over and over and over and growing inward instead of outward into a modern, efficient law enforcement agency? It all depends on the cost. ... That'll be the deciding factor."

In the past, breaks in the sewer system even impacted criminal cases, with sewage seeping into the basement evidence room and destroying blood samples that the sheriff's office was about to send to the state crime lab in the mid-2000s, Bailey said.

The sheriff's office has not kept new evidence in the downstairs basement for years, Bailey said, instead using the building's old jail cells on the ground floor to store evidence. Rape kits and packages of murder evidence are now locked up behind the white bars of cells 13 and 14, where pairs of men were held until, 1999 when the Multi-County Correctional Center went on line.

But behind the basement evidence room's locked door are boxes piled high to the ceiling, each containing evidence from crimes long gone, evidence that sheriff's office employees are slowly picking through.

A stroller laid on its side on the floor Wednesday, and a trash can filled with baseball and T-ball bats sat in the middle of the room, each bat bearing a case number in permanent marker or on a Post-it note. A brown paper bag sitting in a box held a V-8 can that appeared to have been checked for fingerprints.

A nine-page catalog of the items in the evidence room that was provided by the sheriff's office mostly lists the case numbers corresponding to each item, but there are some unmarked items, including a bag of clothing, "possibly from death on Barks Rd. in culvert." Most of the cases are from the 1990s, according to the catalog.

"We'll just peck away at this down here. ... This stuff is either we have to keep forever or it's going to be destroyed," Yoder said.

In cases where a suspect has been convicted of a serious crime, such as murder, manslaughter or rape, law enforcement generally must keep biological evidence for as long as that person is incarcerated, though if the suspect entered a guilty plea, law enforcement could destroy the evidence as soon as five years after the plea.

That information is important to Yoder, whose job it is to sort through all the old evidence and decide what to keep and what to chuck. His job is made even more difficult by the age of the cases boxed up in the old evidence room, most of which pre-date computerized records.

"Every case I have to look up. ... I have to hand check it in the (paper) records," he said, adding that he looks for how the case turned out and whether it went through appeals.

It's a problem the sheriff's office will continue chipping away at, Bailey said.