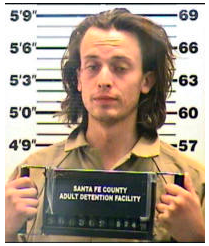 SANTA FE – Derek Nicholas Padilla had himself a busy month.

According to online court records, Padilla has been charged in nine separate cases in Santa Fe magistrate and District Court since May 4 – mostly for vehicle theft, but also for breaking and entering, trespassing, possession of controlled substances and concealing his identity. And that's not counting the federal case brought against him late last month for theft of government property.

According to a criminal complaint filed in U.S. District Court, Padilla, 29, is accused of stealing an SUV from Santa Fe Studios and later a pickup truck from the Bureau of Indian Affairs compound on Nambé Pueblo. He also allegedly stole a dozen firearms from the BIA Office of Justice Services in Nambé and controlled substances from an evidence room at the office.

Padilla is scheduled to be arraigned Wednesday on the theft of government property charge in federal Magistrate Court in Albuquerque.

An affidavit from BIA Special Agent Carleen Fischer says that on May 20 the Santa Fe County Sheriff's Office was called to investigate an abandoned 2019 Infiniti SUV parked on Arroyo Cuyamungue Road in Nambé. While trying to determine the vehicle's owner, deputies found a debit card belonging to Padilla and several firearms. BIA officials were called and it was discovered that a storage building on the BIA compound had been broken into, the security system had been dismantled and the door to the evidence room was breached.

"There was indication that someone had been living in the building as there was clothing under a desk in one of the offices," Fischer's affidavit says. "In addition, boxes of Meals Ready-to-Eat (MRE's) belonging to BIA Fire Agency had been opened and some were laying on the desk."

A Ford pickup truck owned by the BIA was also missing from the compound.

That same day Santa Fe deputies located Padilla about a mile away from the compound and questioned him about the vehicle in which his debit card and guns were found. Padilla told deputies that he recently bought the SUV from someone for $900 with the money he had received from his stimulus check. He said the weapons belonged to a man and woman he had met in an Española park who were trying to sell the guns.

"According to Padilla, the couple got into a fight and walked off, leaving the firearms in his car," the affidavit states.

Padilla was let go, but the next day deputies conducted a more thorough search of the vehicle, which by then was suspected of being stolen from Santa Fe Studios. That's when they found a "green leafy substance and white powdery substance in baggies with evidence tape from the BIA NPA Evidence room at the compound." They also found syringes, which Padilla previously admitted belonged to him as he was a heroin addict.

Then, on May 22, a BIA officer was driving through Española when he spotted the missing BIA pickup truck traveling down Paseo de Oñate. A police pursuit ensued, the pickup truck crashed and Padilla and another man ran away but were caught and detained, according to the affidavit.

Two days later, Santa Fe County deputies arrested Padilla for breaking into Santa Fe Studios while attempting to steal a Jeep. He was booked into the Santa Fe County jail May 24 and is being held without bond.