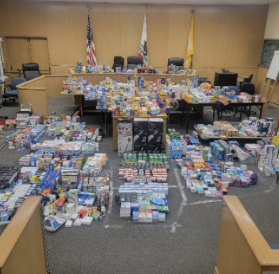 The department's Burglary Unit and Organized Retail Theft Taskforce launched an investigation in early 2022 based on information they received from local retailers. The stolen goods include over-the-counter medication and personal care products.

The search warrant was served at Tenorio's home on Milton Street in San Francisco's Ingleside District. SFPD determined that Tenorio's operation was in place over at least the last three years, yielding more than $500,000 annually.

The goods were being sold online and shipped to people nationwide, SFPD said. Police believe there are other people in the city conducting similar operations.

Tenorio was booked into San Francisco County Jail on one count of possession of stolen property. Investigators are working with local retailers to determine where the stolen goods came from.