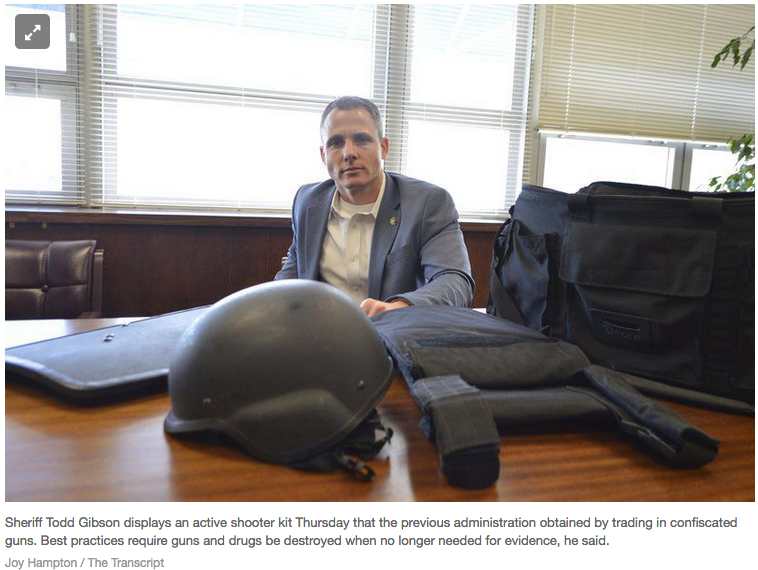 NORMAN — An audit report issued on Jan. 2 raises further concerns over the state of the Cleveland County sheriff's department under the previous administration.

Former sheriff Joe Lester resigned suddenly on Oct. 2 after findings from an operations audit performed by the Oklahoma State Auditor and Inspector's office were released. That audit cited multiple incidents of possible mismanagement and lack of compliance with state statutes.

"It's my understanding from talking to the state auditor that any time you do an inventory like that there will be some items that didn't get taken off the inventory sheet," Gibson said. "Oftentimes these are trivial items like a file cabinet bought in the 1980s. Those things don't necessarily concern me. What concerns me is there were several radios unaccounted for. That's clearly something we need to investigate."

Evidence logs were also an item of note in the exit audit.

"I am keenly aware of the International Association of Property and Evidence standards and guidelines," said Gibson, who supervised the Norman Police Department's property evidence section during his tenure and implemented IAPE standards. "I knew, coming into this position, that property custody and evidence was going to be a priority of mine."

Gibson said an evidence log existed, but under the previous administration, that log was not used appropriately.

Currently, property is logged into three different locations. Gibson said that is a problem.

"Once we get a complete inventory done, and we're talking about 10,000 to 11,000 pieces of property, we'll start the quarterly audit process," Gibson said. "There are three major categories that we want to routinely monitor and audit: guns, drugs and money."

"We don't want to keep property if we don't have to, so we want to reduce the numbers of property custody as early as we legally can," Gibson said. "We destroy guns, which wasn't being done previously, and we destroy drugs. That's industry best practice."

Reducing property means working with the district attorney's office and prosecutors to determine when property can be released back to owners and victims or disposed of by appropriate legal means.

"It's of utmost importance to protect credibility to make sure your evidence has the correct chain of custody," said District Attorney Greg Mashburn. "I trust that Sheriff Gibson and his staff will put the policies and procedures in place to safeguard the evidence and preserve it for use in our prosecutions."

When property is broken or lost, a memo should record the event with an explanation of what happened. The property then must be surplussed and removed from inventory, Gibson said.

"There is a specific and narrow process for getting rid of old, outdated, non-usable or damaged equipment belonging to the county," Gibson said. "It's not reasonable that we should buy a desk in 1981 and keep it for 100 years. There's a process, though, for eliminating that desk when it has reached the end of its service life, and that process wasn't followed."

Gibson said accountability and transparency are primary goals of his office and keeping accurate records will protect the legal process and allow for better accountability to taxpayers.

Lester gave one standard response for each area of findings:

"Unfortunately, without full access to the Sheriff's Department and County records, Sheriff's Office personnel and County personnel, as well as adequate time to fully investigate the proposed findings, any response would be incomplete. I am simply not in possession of adequate information to be able to adequately respond to the exit audit."