St. Lucie County Clerk of Court digs out some of the oldest, most chilling pieces of evidence

Evidence from nearly 4,000 cases sits inside two evidence vaults in the St. Lucie County Courthouse. Some have been stored there for decades. 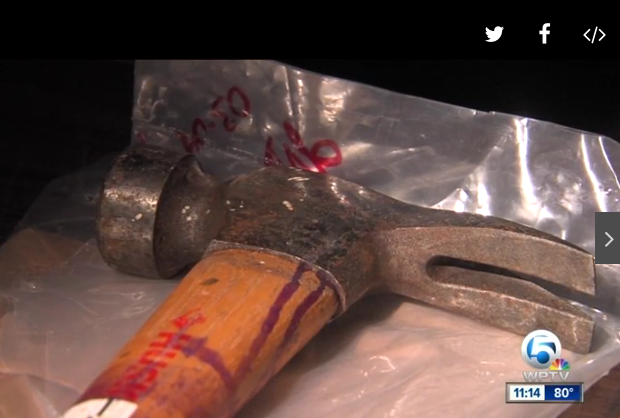 ST. LUCIE COUNTY, Fla. -- They're the items behind some of the most haunting, shocking and tragic crimes in our community.

Evidence from nearly 4,000 cases sits inside two evidence vaults in the St. Lucie County Courthouse. Some have been stored there for decades.

Clerk of the Circuit Court Joseph Smith serves as their guardian, tasked with preserving and protecting the evidence vital to keeping criminals behind bars, or innocent people free.

"The evidence we have, it affects someone's life," Smith said.

Whenever crimes are committed in the county, and investigators scour the crime scenes for evidence, Smith knows he will likely be making room in the vaults for evidence needed to tell a story to a jury.

"You never know what you're going to end up getting," Smith said.

Every piece of evidence tells a story that sometimes can not be told through a picture of the evidence. That's why even the largest pieces, like mattresses, doorways or tree limbs are kept safely stowed away.

"A lot of it is really about story telling," Smith said. Jurors can visualize a crime more easily seeing pieces of the crime in person, while they help attorneys and prosecutors passionately argue their case.

The stories held behind the walls of the vault are grim."You walk in that room and you just see evil," Smith said.

Smith brought out some of the pieces of evidence that have helped close some of the biggest cases in the county over decades."Those are the ones that keep you up at night."

In 1993, Darcus Wright shot and killed his wife. A bullet-riddled mattress is among the larger items still stored in the vault."Three bullet holes were right on this mattress."

Wright is serving a life sentence.

In 2006, Albert Estrada shot his wife, and buried her body in a shallow grave.

Bullets pierced through a bloodstained door.

"This is actually the mop from when he tried to clean up the blood from the murder," Smith showed us. Some pieces are more disturbing than tragic. Standing ten feet tall, a doll is nailed to a cross, with black face and satanic symbols. "It's the thing we always see when we walk into the evidence locker," Smith said.

It was used to convict serial church arsonist Henry Dreverman of his crimes in 2004.

He is serving a life sentence for the arson and attempted murder."I suspect we are the single owners of something of this nature for sure," Smith said. A tree limb and thick, heavy rope tell a story of survival from 1973.

Two women's fight to live is shown through a scarred tree limb. "Law enforcement believes these are areas where the rope where the ladies were trying to free themselves," Smith said. Lines in the tree show where rope was tied for hanging.

Smith said former Martin County Sheriff's Deputy Gerard Schaefer tried to kidnap and tie up to women who ultimately escaped."You're going to claw your way out as best as you can." He was sentenced for killing two other women.

Though he died in prison, the evidence could still be saved for decades in case other survivors come forward. "They're not sure how many people he may have done this to. Some say up to 30," Smith said.

Smith also brought out evidence from two cases that could soon get new life.

Recent changes in juvenile sentencing laws means people who were sentenced to life as juveniles could get new sentencing hearings. That means the rusty spray paint cans, and eye glasses used to sentence Victor Brancaccio to life in prison could soon be back on display in a courtroom.

In 1993, Brancaccio killed an elderly woman who complained about his loud music. He did not only beat her to death. "He painted her body, then burned her," Smith said. The eye glasses were worn by the elderly woman. "You could paint a really good picture of who she was."

Teen killer Tyler Hadley will also be going back to court. The hammer he used to kill his parents is still secured as evidence. Hadley bludgeoned his parents to death in 2011, then held a party in their house with the bodies in another room. "Most people will see this hammer and think gosh, this isn't the hammer I was thinking about."

The size and the weight of the hammer pulled at Smith's emotions seeing it for the first time. He's also a father."You can't help but get a little emotional, looking at it and wondering what brought that family to this point," Smith said.

He knows the stakes are high if any of the evidence is ever jeopardized.

"Someone who was initially innocent is now found guilty. Or someone who is guilty as sin is found not guilty, and gets away with murder, literally."

And while his job forces him to be frequently reminded about the darker side of life, he's learned to view the evidence in a different way.

"We are surrounded by a lot of bad things, but it really is a small amount of all the great and the good that goes on in the world."

Evidence for all capital crimes, like first-degree murder, are kept for the lifetime of someone serving a life sentence, or until someone on death row is executed. Even then, it takes a court order and State Attorney approval to remove or destroy any evidence.

St. Lucie County Clerk of Court digs out some of the oldest, most chilling pieces of evidence - wptv.com

They’re the items behind some of the most haunting, shocking and tragic crimes in our community.
http://www.wptv.com/news/region-st-lucie-county/st-lucie-county-clerk-of-court-digs-out-some-of-the-oldest-most-chilling-pieces-of-evidence
Tweet
How do you feel about this post?
Happy (0)
Love (0)
Surprised (0)
Sad (0)
Angry (0)
Tags:
evidence vault Big Three: Chain of Custody assault  kits altered evidence
Ex-Springfield cop accused of stealing from eviden...
Saliva helps detectives solve double murder case