In the audit, Keller said, his staff found 80 different policies and procedures on sexual assault investigations in the state's 130 police
agencies. 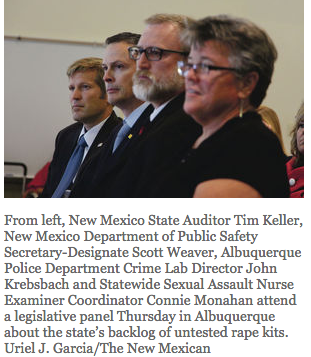 he New Mexican ALBUQUERQUE — State Auditor Tim Keller on Thursday told a panel of lawmakers that officers' discretion and the lack of structured policies on sexual assault investigations in New Mexico police departments are the main reasons the state has 5,400 untested rape kits, some of which date to 1988. Keller's office audited eight police departments this summer and reviewed the policies of others to determine what caused the backlog.

He told legislators on the Courts, Corrections and Justice Committee that he plans to help create guidelines on best practices for police agencies and policymakers to review later this year. In the audit, Keller said, his staff found 80 different policies and procedures on sexual assault investigations in the state's 130 police agencies.

Many leave it to an individual police officer's judgment as to what to do with the evidence, commonly called rape kits, he said. Greg Fouratt, who was the state Cabinet secretary of the Department of Public Safety, revealed the number of untested rape kits last year.

After that, some law enforcement officials told lawmakers that crime labs were understaffed, underfunded or did not have the technology to process rape kits. Keller, a Democrat, offered a different explanation. He placed responsibility for the backlog on police officers, saying they chose not to send rape kits to a crime lab to test for DNA evidence. "The backlog on the department level, a lot of it is by choice.

The choice might be simply just not address it," Keller said. "But I don't want to lose the fact that, as much as we need policies, it is very much, very very much, a local officer choice." If police departments had better policies, Keller said, they may have provided better guidance for their officers on how to proceed in rape investigations. Some quibbled with Keller's assessment.

John Krebsbach, the crime lab director for Albuquerque's police department, told lawmakers that his lab didn't have the resources or the technology to process evidence for DNA until 1993. And, as rape kits accumulated, technicians also had to keep up with evidence collected in other serious crimes, he said. Fouratt, acting after complaints by advocates for rape victims, sent out a survey last year asking the state's law enforcement agencies how many untested rape kits they had.

Most responded, and Fouratt announced the total of 5,400 untested kits. He didn't ask why police agencies had not tested the evidence for DNA, and the agencies didn't provide reasons. The state Legislature this year allocated $1.2 million to the state Department of Public Safety to hire more lab technicians and expand its crime lab in Santa Fe to process about 1,400 untested rape kits. Those kits are from agencies that depend on the state department's crime lab. Seventy-three percent, or 3,476, of the untested kits are from the Albuquerque Police Department, which has its own crime lab.

Albuquerque Mayor Richard Berry, a Republican, announced last month that the city would spend $200,000 to start processing the evidence. He's also hired three retired detectives to review some of the sexual assault cases with untested rape kits. After police receive a report of sexual assault, a nurse collects evidence such as saliva, semen and blood by swabbing the victim's body.

The evidence then is stored in a kit. It also can include undergarments or other clothes that may contain DNA. If DNA testing is done on this evidence, the results can be checked against a state database of other sex crimes, some of which might have an identified suspect or even someone who's been convicted of a rape. New Mexico's Katie's Law requires jailers to obtain a DNA sample from everyone arrested on suspicion of a felony. But the issue of evidence sitting untested has been a nationwide problem.

"We definitely need to write policies," said Connie Monahan, coordinator for the Statewide Sexual Assault Nurse Examiner. "For too long decisions have been made based on the individual's judgment. I don't think the policies have to be complicated, but there needs to be standardization around the state."