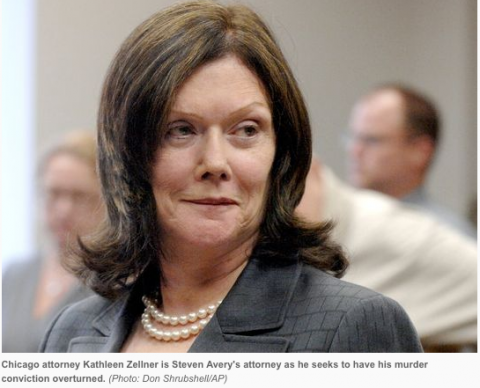 "Making a Murderer" fans had better get their boots on.

"If you think we are just tweeting...think again," Kathleen Zellner tweeted to her 164,000 Twitter followers this week. "A tsunami of new evidence is on the way."

The Chicago-area attorney has vowed to win exoneration for her client in the brutal 2005 slaying of Teresa Halbach, a photographer who had gone to Avery's Mishicot-area auto-salvage yard to photograph Avery's car for Autotrader magazine.

The Halbach slaying, and the subsequent trials and convictions of Avery and his teenage nephew Brendan Dassey, form the basis for the popular-yet-controversial Netflix series "Making a Murderer." Avery previously served 18 years in state prison for a 1985 beachfront rape that DNA ultimately proved he did not commit.

A marathon. Not a sprint.

While Zellner has publicly described herself as a legal "sprinter," as opposed to a distance runner, Avery's other attorney tells a Kansas City TV station that working to overturn a murder conviction is more of an ultra-marathon.

"We're working to find new evidence that proves his innocence," Tricia Bushnell of the Midwest Innocence Project tells KHSB. "We are feeling very confident that we are collecting all those parts to present."

But, as the TV report points out, it typically takes seven to 10 years to free a person who was wrongly convicted of murder. (It also says Bushnell's group is working on cases in five states, omitting Wisconsin, but who are we to nitpick?)

Bushnell says she can't reveal specifics about Avery's legal strategy — no surprise there — but she says an appeal could be filed in August.

That said, the report does deliver some news about the Innocence Project and its work. Among other things, the group has 600 potential cases on a waiting list but is running short on money.

The best quote in the story? That's from Bushnell regarding police addressing a female witness in the 1982 murder conviction of St. Louis resident Rodney Lee Lincoln, 71, who recently lost an appeal in his case.

"They came to her and said, 'Behind the door is a bad man, and if you don't pick the bad man, he'll go free.'"

USA TODAY NETWORK-Wisconsin colleague Andy Thompson reports "there's no telling when a decision will be handed down" by the Milwaukee-based federal magistrate who received legal briefs from Dassey's lawyers 13 months ago.

"I've certainly seen others that have taken this long or longer," said Michael M. O'Hear, a professor at the Marquette University Law School. "My sense is that there are some unusually complicated legal and factual issues in this case."

Dassey's attorneys claim he was illegally arrested and imprisoned, and that his confession was coerced by detectives. The state insists that Dassey was treated fairly during the interrogation process and point out that his convictions have been upheld by a Wisconsin court of appeals.

For a deeper dive into the prosecution of Avery and another accused killer, read colleague John Ferak's look at the role of fingerprints in the Avery and Dennis Brantner prosecutions.

Lincoln, the Huffington Post said earlier this year, is "the Steven Avery no one knows about."

No timeline for Dassey ruling

The appeal of Dassey's conviction also could be a marathon.

Brantner also is accused of killing a young woman — Fond du Lac teenager Berit Beck, who was abducted from a mall parking lot while en route to a job interview in Appleton. A jury in his trial was unable to agree on a verdict; he is likely to be re-tried.

Ferak points out differences in the case: Brantner's jury was unwilling to convict him despite fingerprint evidence that prosecutors said connects him to Beck's van. Brantner's lawyer tells Ferak there is no other physical evidence linking him and the victim.

Avery's jury convicted him despite the fact that Avery's prints were not found in Halbach's sport-utility vehicle.

Tweet
How do you feel about this post?
Happy (0)
Love (0)
Surprised (0)
Sad (0)
Angry (0)
Berkeley police arrest 2008 serial rape suspect
West Midlands Police officer sacked over theft and...
Comment for this post has been locked by admin.