Sheriff Matthew Wade said the boxes held just some of the 921 guns stored by deputies in the Sheriff's Office's three evidence lockers. 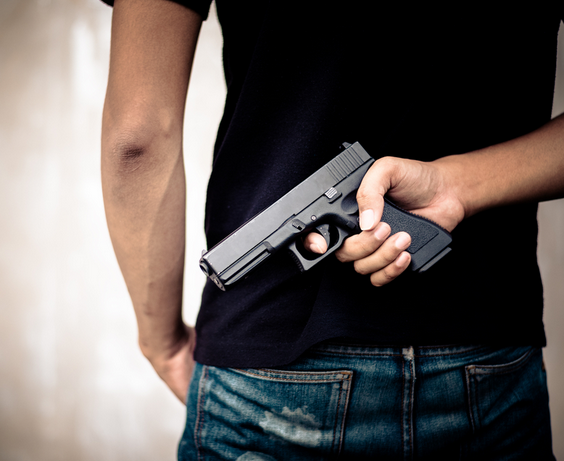 ANNISTON, Ala. — Dozens of white boxes sat stacked atop shelves and propped against walls on a recent Wednesday in a small room in the back of the Calhoun County Sheriff's Office. Some of the small boxes contained pistols, while some of the bigger, longer ones held shotguns. A few unboxed shotguns lay in a pile on a shelf.

Sheriff Matthew Wade said the boxes held just some of the 921 guns stored by deputies in the Sheriff's Office's three evidence lockers. The guns were stored in the lockers along with drugs and other evidence of alleged crimes.

At least some of the guns were taken from people whose partners had filed protection-from-abuse orders against them, with the requirement that they relinquish any firearms. While Wade couldn't say how many guns were taken as the result of such orders, he said deputies had served 452 protection orders within the past year.

Wade said finding the people who need to be served with a protection order is difficult, and taking guns out of their hands is even harder.

"There are rules that have to be followed, and those rules are set forth by the Constitution," he said.

[Related: Only One Alabama Program Works on Domestic Violence Plus Firearms]

According to Wade, anyone who is under an active protection-from-abuse order is legally barred from having a firearm. However, he said, that does not give deputies the right to take that person's guns unless they are specifically ordered to by a judge.

Even if a judge does make that order, Wade said, the order doesn't carry the force of a search warrant.

Typically, he said, when deputies are told to take someone's guns, they will knock on the door and ask for them. If the person claims they don't have any guns, Wade said, deputies still don't have permission to search their home.

"Most people don't know how many guns somebody has," Wade said. "The court just says, 'Take all firearms,' so we take the firearms that we can discover or know about. If we can't find any, then there's no way to determine whether we get them all."

Additionally, he said, it can be hard for deputies to serve protection orders if the defendant lives outside the county or is not living at the address listed in documents.

Once the protection order expires, Wade said, the defendants are allowed to get their guns back. People come to the Sheriff's Office "all the time" to pick up guns.

When Calhoun County Circuit Judge Peggy Miller Lacher grants protection orders, she said, she makes sure to include the Alabama statute that bars the defendants from having guns as a reminder when the orders are served.

Judges can order deputies to take a defendant's guns after a hearing, which is typically held within 10 days of a PFA petition being filed. However, Lacher said, those hearings can be postponed during certain situations; if one of the parties lives out of state or is in jail, for example.

She typically looks at the level of violence committed against the plaintiff and the defendant's criminal history before deciding whether to order deputies to confiscate any firearms.

If the defendant has had numerous PFAs filed against them or domestic violence charges, or a history of gun threats or gun violence, Lacher said, she'll likely order those guns taken.

If deputies searched a served person's home using a warrant for another crime and find the guns, Wade said, they could be charged with violating a protection-from-abuse order, a Class A misdemeanor.

Dozens of white boxes sat stacked atop shelves and propped against walls on a recent Wednesday in a small room in the back of the Calhoun County Sheriff’s Office. Some of the small boxes contained pistols, while some of the bigger, longer ones held shotguns. A few unboxed shotguns lay in a pile on a shelf.
https://jjie.org/2019/11/10/taking-firearms-from-domestic-violence-suspects-is-challenging-officials-say/
Tweet
How do you feel about this post?
Happy (0)
Love (0)
Surprised (0)
Sad (0)
Angry (0)
Tags:
gun box evidence lockers
U.S. grand jury indicts ex-deputy in theft of FBI'...
Maryland approves $9 million settlement for five w...