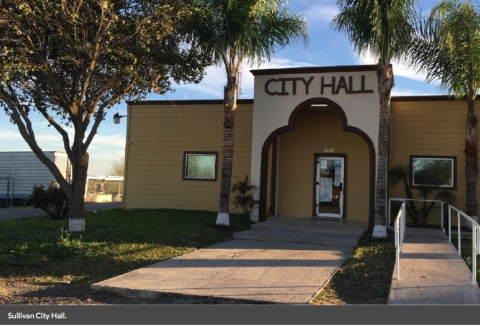 "When asked to explain the events inside the entrusted property room, Officer de la Mora advised he was assisting with cleaning the evidence room, which contained marijuana, weapons and other property," according to the report.

Along with the mop, de la Mora brought a plastic bag.

de la Mora simplified the process with a second bottle, simply dumping some of the liquid.

"Chief Martinez and Investigator Cortes entered the evidence room, stood by and watched as Officer de la Mora began to grab something from the upper shelf (eye level) and placed something into the same plastic bottle several times."

The Texas Ranger who questioned de la Mora asked him to hand over the marijuana. They drove to de la Mora's house. When they arrived, de la Mora's wife had the bottles waiting on the kitchen counter.

"Ranger Garcia observed and photographed the bottles, each one described as 16 fluid ounce of Dollar General Isopropyl 50% Alcohol," according to the report. "Ranger Garcia also noticed that both bottles de la Mora was in possession of contained a green leafy substance, a green colored liquid and had the distinct smell of marijuana and rubbing alcohol."

When the Texas Rangers questioned de la Mora, he claimed that Martinez allowed him to take the marijuana.

Martinez, though, told a different story.

"Chief Martinez stated he never gave him permission to take the marijuana and instead told Officer de la Mora (in Spanish) 'leave it there, don't take it because it looks bad and there's cameras," according to the report.

Martinez said he pointed to the camera during the conversation.

"Ranger Garcia asked Chief Martinez why he did not try to physically stop Officer de la Mora from leaving with the marijuana," according to the report. "Chief Martinez replied he had expected him to comply when given an order, but could not provided Ranger Garcia with a decisive answer."

Martinez had another chance to stop de la Mora, but didn't.

"Ranger Garcia asked Chief Martinez why he had not seized the 2 plastic bottles with the marijuana since the surveillance video depicted him moving both bottles from one end of the desk to the other," according to the report. "Chief Martinez did not recall moving the two plastic bottles."

Attorney David Higdon, who represents Martinez, declined to comment on the report.

Prosecutors presented the case to a grand jury, which returned a four-count indictment against de la Mora:

Prosecutors struck a deal with de la Mora, who pleaded guilty to both misdemeanors. A judge dismissed the felony charges against him.

The grand jury returned a three-count indictment against Martinez :

Cortes -- the police investigators present during the incident -- wasn't indicted. He still works for Sullivan City.

The Texas Department of Public Safety declined to comment on the case.

Amid the Texas Rangers investigation, Sullivan City started searching for a leak.

Police Sgt. Daniel Duran had contacted the Texas Rangers, providing them with a statement and video showing the incident on May 21. Afraid of retaliation, he kept quiet.

Duran recounted the awkward situation in a sworn statement provided to the Texas Rangers.

"On the following days, I was questioned by the city manager, Judy Davila, as to who may have provided video surveillance from the police department to the Texas Rangers," according to the statement. "I did not admit to providing the video at the moment due to the fact that Ms. Davila informed me that city commissioners threatened to terminate whoever was responsible for providing video footage."

According to the statement:

After the meeting with the city manager Chief Martinez contacted me and advised me he knew I provided the video footage of the incident to the Texas Rangers and he also advised me he had been suspended by the city manager but did not give me a reason why. It was during this time that Chief Martinez advised me that the bottles of alcohol were located by the Texas Rangers at Officer de la Mora's residence containing marijuana.Chief Martinez also advised me that he had spoken to Commissioner Leo garcia in regard to who had provided the video to the Texas Rangers and he advised me to be careful because they intended to terminate whoever was responsible.After speaking to both Ms. Davila and Chief Martinez I believe I will be retaliated against for doing the right thing and reporting the incident to the proper authorities due to the fact that I have exposed corruption within our department and the inability of the chief of police and city manager to lead us.

Duran later admitted to contacting the Texas Rangers. The city suspended him without pay for three days, accusing him of improperly disseminating confidential information.

He filed a whistleblower lawsuit, which remains pending.