The sheriff realized there was evidence missing from the evidence room, and found numerous evidence bags in Mr. Barrett's office 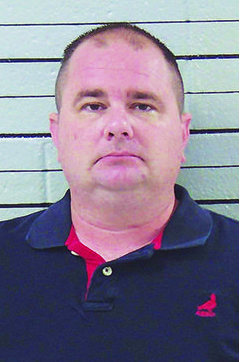 He was sentenced to 50 years, 10 to serve in the state penal system. He was also banished from the circuit, and had to give up his POST certification.

The charges include theft by taking, distribution of controled services and violation of oath of office.

District Attorney Stephen Bradley said that Mr. Barrett had an accident with a deer in March, 2017. Protocol required him to have a urine test, and he was reluctant to have the scan. As it turns out, he had a problem with prescription drugs.
The sheriff realized there was evidence missing from the evidence room, and found numerous evidence bags in Mr. Barrett's office. Sheriff Donnie Pope contacted the Georgia Bureau of Investigation (GBI), who did a complete investigation.

It turns out Mr. Barrett was swapping evidence drugs for what he needed on the street. He originally faced some 134 counts Mr. Bradley said that Mr. Barrett compromised a number of cases. .His actions constitute a profound betrayal of trust, said Mr. Bradley.

Mr. Barrett apologized to Sheriff Pope and to the court, calling it a tragedy, and asking for forgiveness.

Judge Amanda Petty said his actions serve to tarnish the reputation of good men and women who put their lives on the line every day. She said she was not sure there was sufficient punishment to fit the crime, but that Mr. Barrett had lots of time to think about it. She said a lot of people have addiction problems, and don't react like he did.

Sheriff Pope said he was glad to hear of Mr. Barrett's deep remorse, but that it doesn't change what happened. Mr. Bradley said it was one of the most seriously disturbing cases that we've had in the circuit in a long time.