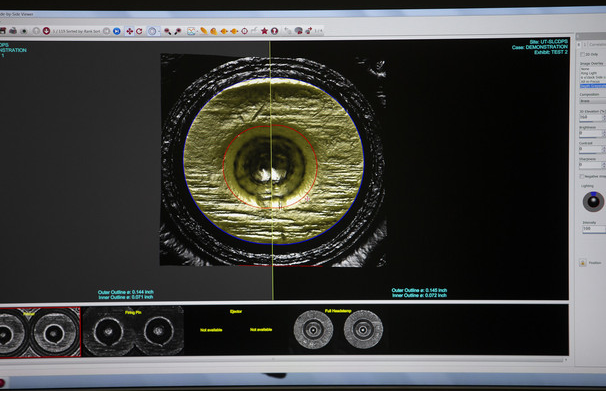 TAYLORSVILLE — Eight rounds from a gun hit a South Salt Lake home about midnight on June 30.

Police relied on cutting-edge technology to match shell casings found at the scene of the drive-by shooting to the gun that fired the bullets and the Ogden man who allegedly pulled the trigger.

Federal, state and local law enforcement leaders say the arrest is a "graphic" example of the role the ballistics network and the recently formed Crime Gun Intelligence Center play in piecing together violent crimes.

"We have successfully deployed the technology that should leave gang members and thugs shaking in their boots," he said.

Regina Lombardo, associate deputy director of the Bureau of Alcohol, Tobacco, Firearms and Explosives, joined Huber and state and local police at a news conference Monday touting the program. She called it a "game changer."

The technology, which the state crime lab has used since last August, allows police to match spent shell casings to the guns that fire them.

Guns when fired leave unique marks on the ammunition casings. Like fingerprints, no two guns leave the same marks on a casing. Forensic scientists conduct test fires and take 3D images of ballistic evidence and identify possible matches to other gun crime scenes.

To date, Utah law enforcers have entered 1,200 casings into the system, resulting in 56 hits in 75 cases. And 15 of those hits involve three or more shootings linked to serial shooters, said Department of Public Safety Commissioner Keith Squires.

Justin Bechaver, senior forensic scientist and manager of the crime lab firearms section, sends detailed images of shell casings to an instrument in California that looks for other features.

"That information gets sent back to us and we compare those images that it thinks matches and we look for potential matches from the local database that we have here," he said.

Bechaver said the lab searches the database in Utah as well as surrounding states, but could also search in states across the country.

"Typically, we focus on the semi-automatic type pistols. They're the most commonly used," he said.

Police used the technology to match shell casings to a .45-caliber pistol a Herriman man allegedly used to shoot at a Unified police officer and to break into an apartment and shoot a resident there in January.

Investigators also earlier this year linked a gun found in a toilet tank of an Ogden man's house to a shooting involving a rival gang member the week before using the ballistic information network.