The Benefit Of Bicycles 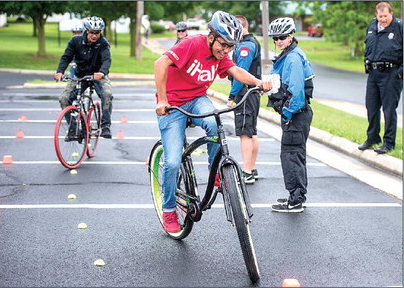 Rainy weather Wednesday didn't keep police away from the Lucy F. Simms Continuing Education Center to donate refurbished, used bicycles to teenagers in need. The recipients are members of the Boys & Girls Clubs of Harrisonburg and Rockingham County, whose headquarters is at the Simms Center. Helmets were also donated by the Harrisonburg Fire Department, and the club provided locks. While the Harrisonburg Police Department donated 14 bicycles to specifi c members of the organization, only six teenagers showed up to the event, which also featured a bicycle safety rodeo in the parking lot. According to Sgt. Charles Grubbs,

The department hopes to make the donation a recurring program in which bicycles collected as evidence get new life. "We collect a lot of bikes on the job," Grubbs said. "In the past, we'd just destroy them, but we've tried to find a better avenue so that they can be useful." HPD contacted the Boys & Girls Clubs about giving the bikes away. According to Lori Kizner, executive director of the club, the 14 recipients were identified based on several factors, including size (if they were a good fit for the bike), frequency of club attendance, participation and need. "A lot of these kids don't get a lot of extra things at home," Kizner said.

"So, it's cool for them to feel cared about in this way." Kizner also thinks the bicycles will be useful because many of the teens play basketball at the club until 6:30 p.m. and have no transportation home. HPD has been refurbishing the bicycles for the past three weeks with help from Shenandoah Bicycle Co. Officer John Lamb, who works in HPD's evidence unit, sees environmental and community benefits to reusing the old bicycles. "A lot of the stuff has to be destroyed," he said. "But this gives us the opportunity to be a bit more green-conscious. And it's nice for the police to be able to do something where there's not even a nuance of ugliness." Harrisonburg resident Vyshon Washington, 15, has participated in the club since he was 5 or 6 years old and feels that it helps him to stay off the streets and out of trouble. He expressed gratitude toward the officers and said the event was important for the community on a deeper level. "It's cool because it's joining police and kids together," Vyshon said. "They help us, and we gotta be able to get along with each other." Contact 574-6273

The Benefit Of Bicycles | Harrisonburg | dnronline.com

HARRISONBURG — Rainy weather Wednesday didn’t keep police away from the Lucy F. Simms Continuing Education Center to donate refurbished, used bicycles to teenagers in need.
http://www.dnronline.com/news/harrisonburg/the-benefit-of-bicycles/article_433cac82-40f5-11e7-a4e8-e37869fc4d6c.html
Tweet
How do you feel about this post?
Happy (0)
Love (0)
Surprised (0)
Sad (0)
Angry (0)
Tags:
Big Three: Chain of Custody assault  kits altered evidence
Ohio coroner runs out of room for bodies due to sp...
Police department gets cat to protect evidence roo...
Comment for this post has been locked by admin.