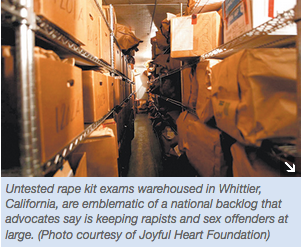 Like many states, Indiana has a problem — mountains of untested rape exam kits in local law enforcement agencies that contain DNA evidence potentially identifying sex offenders. Indiana's backlog of untested kits is certainly in the thousands. Victim advocates say the question is, how many thousands?

No one can accurately answer that question — at least not until Dec. 1. That's when a report to lawmakers is due from Indiana State Police, detailing the number of untested kits warehoused by law enforcement agencies around the state.

"We want to know the numbers and perhaps just as important, the reasons for which they may not have been processed to start with," said Sen. Mike Crider, R-Greenfield. Crider authored Senate Resolution 55, which passed the General Assembly this year and put in motion the state police audit.

But getting a count isn't as easy as it might seem, because local law enforcement agencies may not have those numbers readily available and may not comply with the audit. Little in state law provides guidance to police departments regarding the custody of evidence collected from victims of sexual assault, and there are no statewide standards regarding testing procedures or protocols.

Ilse Knecht is director of policy and advocacy for the Joyful Heart Foundation, which advocates for ending the backlog of untested rape exam kits. She said in an interview the group has documented a backlog of more than 5,000 untested kits in the Indianapolis area alone. She said a best guess is there may be 10,000 or more untested kits statewide.

"The first step to addressing a problem is figuring out how big it is," Knecht said. According to the foundation, Indiana is one of only 12 states that have made no statewide reforms in addressing the backlog of untested kits.

Knecht and others say victims of sexual assault who submit to a rape kit exam undergo invasive and sometimes painful procedures during a traumatic time to collect evidence that conclusively provides a genetic profile of their attackers. "What is the message we are sending to survivors of sexual assault?" she asked, when exam kits sit unprocessed. She also worries about the message the backlog may send to sexual predators.

"It stems from the way that I think the criminal justice system has underappreciated how dangerous sexual assault is, and haven't prioritized it," Knecht said. She said there's also been an underappreciation of the certainty of DNA evidence and of the propensity of rapists to be serial offenders.

She said that's been proven by municipalities that addressed their backlogs. Detroit recently tested a backlog of about 10,000 kits. According to the Joyful Heart Foundation, results uncovered 807 potential serial rapists, resulting in 101 convictions.

"What we're finding now is there are serial offenders, and that the evidence may be sitting in an untested rape kit," said Rep. Sue Errington, D-Muncie. She has introduced legislation in the past to address the backlog and said she's looking forward to the results of the audit to guide future bills. But she said there are other areas where Indiana could improve its response to sex crimes.

Among the changes she'd like to see: sexual assault response teams available everywhere in the state, whether on a countywide or regional basis.

Aside from Marion County and some other jurisdictions with their own labs capable of analyzing rape test kits, nearly all kits approved to be tested in the state are sent to the Indiana State Police crime lab.

He said ISP will be auditing the kits in its custody, but the agency has no authority over those held by local law enforcement. Obtaining a complete count of the statewide backlog presents a challenge, he said, but the agency is working with the Indiana Prosecuting Attorneys Council to have all the state's prosecutors work with departments in their counties to get the fullest possible picture.

An initial hurdle to any effort to clear the states backlog will be cost. Knecht said the lab costs of conducting DNA testing vary from case to case, but a general range is around $600 to $3,000 per kit, depending on the nature of the analysis. Assuming her estimate of 10,000 cases in the state, that translates to a potential cost of $6 million to $30 million to clear the backlog.

Knecht said a statewide audit is the most fundamental reform the foundation advocates. It also pushes for funding for testing, mandatory testing timeframes and the right of victims to know the status of their kits, among other reforms.

Crider said he's waiting on the results of the audit before proposing reforms, and he hopes for a plan that "provides the most protections possible but not something that creates problems instead of solutions." A longtime law enforcement officer, he's aware of the uniquely complex circumstances sexual assault cases sometimes present. Victims may recant, for instance, or an accused attacker may insist the incident was consensual.

"These are difficult cases in a lot of situations, and hard to prosecute," he said. At the same time, he recognizes the serial nature of many sex offenders. "This is a crime that impacts women and victims for really, their entire lifetime. … The quicker we can get (a serial offender) off the street … the better it is for any potential victims."

Knecht believes that uniform procedures such as requiring testing of all kits within a certain time can relieve some of the prosecutorial difficulties. In many cases, she said the bias of an investigating officer or a prosecutor, or the cost of the testing, may be a factor in whether a kit is submitted for testing.

"It's a systemic breakdown when that happens," she said.

Monroe County Chief Deputy Prosecutor Bob Miller said the backlog of kits is an issue local police and prosecutors have dealt with for years. "Obviously, the state of funding for criminal justice is not a secret," he said.

But prosecutors also are reluctant to submit a kit for testing without the victim's consent. He said exam kits are held for at least a year awaiting the determination of a victim. Being in Bloomington, home of Indiana University, he said, "There are a lot of cases where the victim may feel like they don't want to go through that process in a date rape scenario," for instance.

"The whole goal of this protocol is to let them take some time so no one's forcing them into making a decision one way or the other," Miller said.

Knecht said her foundation's aim to drive reform isn't just to educate policymakers on the backlog, the power of DNA evidence, or the serial nature of many sex offenders.

"We always try to bring it back to, an individual person is behind each one of those kits," she said. "We should be maximizing it to its full potential to keep communities safe."•

Like many states, Indiana has a problem — mountains of untested rape exam kits in local law enforcement agencies that contain DNA evidence potentially identifying sex offenders. Indiana’s backlog of untested kits is certainly in the thousands. Victim advocates say the question is, how many thousands? No one can accurately answer that question — at least not until Dec. 1. That’s when a report to lawmakers is due from Indiana State Police, detailing the number of untested kits warehoused by law enforcement agencies around the . . .
https://www.theindianalawyer.com/articles/44854-untested-rape-exam-kits-number-thousands-in-indiana