Collier said the 200 plus missing guns were not noticed because the paper work was also allegedly stolen and destroyed. 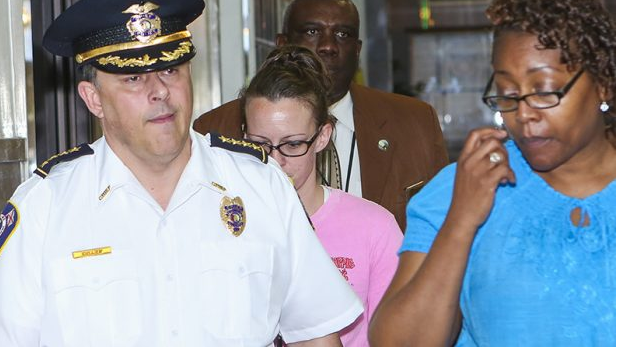 An investigation into a former evidence technician with the Selma Police Department has uncovered a criminal operation allegedly responsible for stealing and selling hundreds of stolen guns from evidence.

Adrianne Michelle Canterbury, 34, was fired and arrested last week for allegedly stealing guns, including one used in an April 14 homicide, and fake gold chains from the department's evidence locker. She was charged with multiple theft charges, an ethics violation for using her office for personal gain and tampering with evidence.

"It's one of the most unusual and probably one of the biggest internal cases I've ever seen," said Selma Police Chief Spencer Collier. "It's basically a racketeering case, but we don't have a racketeering law here in Alabama."

"She had an opportunity when we first arrested her to completely cooperate, and she chose not to do that," Collier said. "It took our investigation continuing to lead to this, so there is no feeling sorry for them."

Collier said the arrests were made after more than 200 guns were discovered in a storage unit.

"Based off the information [Richard Canterbury] gave us, we were able to obtain a search warrant for their home and a rented storage facility," Collier said Thursday afternoon. "In the storage facility we found slightly over 200 guns."

The bulk of those guns came from the evidence vault at the Selma Police Department, which Adrianne Michelle Canterbury had access to as an evidence technician.

Adrianne Michelle Canterbury was hired as an evidence technician in November 2016, and Collier said the department believes the guns were stolen sometime between late November or early December and February.

Canterbury, along with another technician, who is not involved in the case, and a supervising officer, who has been placed on administrative leave, had access to the evidence vault.

When an initial audit of the evidence vault was done, only three handguns were found missing. One of those was used in the murder of 19-year-old Rufus Williams. The gun somehow ended up in possession of Ratravious Sanders, who was charged with murder. Charges related to the murder are expected to be filed on Canterbury.

Collier said the 200 plus missing guns were not noticed because the paper work was also allegedly stolen and destroyed.

"It's hard to audit when you don't have the paperwork to match it. A lot of these guns have been condemned," Collier said. "We've had some guns for years, 10 to 20 years."

Since the thefts, the locks to the evidence locker have been rekeyed twice, and the paper system the department was using to keep track of evidence has been replaced with a digital system.

Collier said Canterbury was allegedly responsible for stealing and selling the weapons, Richard for repairing them and Byrum for selling them.

Richard allegedly told investigators during an interview that Canterbury told him the guns were purchased through police buy-back programs. Collier said he also admitted to purchasing his truck, which has been seized, with money earned from selling the stolen guns.

Collier said Richard is cooperating in the case, as well as people that have purchased some of the guns.

"We've interviewed some people that they sold [guns] to, and they have been very cooperative," he said. "Some have brought the weapons back to us. They had no idea."

Collier stressed the investigation is ongoing, and more charges are expected to be filed.

More details in the case could surface tomorrow, as more interviews are conducted.

An investigation into a former evidence technician with the Selma Police Department has uncovered a criminal operation allegedly responsible for stealing and selling hundreds of stolen guns from evidence. Adrianne Michelle Canterbury, 34, was fired and arrested last week for allegedly stealing guns, including one used in an April 14 homicide, and fake gold chains […]
http://www.selmatimesjournal.com/2017/05/11/investigation-uncovers-alleged-gun-ring-involving-former-spd-evidence-technician/
Tweet
How do you feel about this post?
Happy (0)
Love (0)
Surprised (0)
Sad (0)
Angry (0)
Tags:
evidence technician Big Three: Chain of Custody assault  kits altered evidence
Police camera expert says APD videos were edited
65K items cram evidence building — and Billings po...
Comment for this post has been locked by admin.