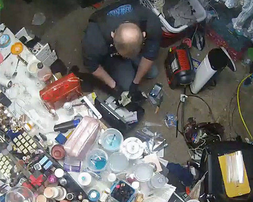 Bremerton Police Detective Jeffrey Inklebarger resigned Saturday in lieu of termination after a home security video system captured him allegedly stealing an unknown amount of cash during a narcotics search warrant in February of 2019.

The homeowner, through her attorney, brought the video to the Kitsap County Prosecutor's Office and Bremerton Police Department back in December. At the request of BPD, the Tacoma Police Department completed an independent criminal investigation into the allegations of on-duty theft by Inklebarger. The report was submitted to the Kitsap County Prosecuting Attorney on Jan. 24 for a charging review.

"We value the trust that the community has in the Bremerton Police Department and we will continue to work every day to earn and maintain that trust," Burchett said. "Once we were made aware of the possible theft, we acted immediately. This was a betrayal of the oath of office and the law enforcement profession. Mr. Inklebarger's actions do not reflect the values of the Bremerton Police Department nor are they representative of the ethical, hard-working men and women of the Department."

"The incident that occurred on the video does not represent the principles and practices of the City of Bremerton or our police department," Bremerton Mayor Greg Wheeler said. "The Bremerton Police have a reputation of being respectful, courteous and professional and are focused on maintaining the trust and confidence of the public. I am thoroughly behind our chief and police department and the values they uphold to serve our community at the highest level."

Inklebarger joined BPD in November of 2004, with prior service as a King County Sheriff's deputy. He was assigned to the Special Operations Group as a narcotics detective on Jan. 1, 2019. BPD is currently conducting an investigation, with the assistance of the Kitsap County Prosecutor's Office and the Bremerton Municipal Prosecutor's Office, to identify current and past cases that may be impacted by Inklebarger's actions.