"In my 40 years in law enforcement, I cannot think of a case more disturbing than this one 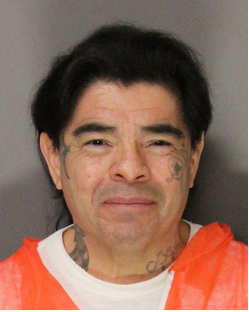 WOODLAND — In a case they described as "chilling," "heartbreaking" and "senseless," authorities announced Monday the arrest of a man suspected of murdering his own five infant children, including a baby boy discovered in rural Yolo County slough whose identity remained a mystery for nearly 13 years.

Paul Allen Perez, 57, came under suspicion after being linked by DNA to the infant found in Yolo County back in 2007, but not identified until several months ago as Nikko Lee Perez, born in Fresno back on Nov. 8, 1996.

The other infants were born between 1992 and 2001 in Merced and Fresno, and all are believed to have been younger than six month old when they died, officials said. Of those, only the remains of Nikko and one other child have been found.

"In my 40 years in law enforcement, I cannot think of a case more disturbing than this one," Yolo County Sheriff Tom Lopez, flanked by representatives of local, state and federal law-enforcement agencies, said at a news conference detailing the cold-case arrest. "There can be no victim more vulnerable and innocent than an infant, and unfortunately this case involves five."

Lopez said the discovery of Nikko's body, along with the inability to identify him, "has haunted my agency for years. But what began as a single unsolved homicide has become something much more. …Sadly, during this investigation we learned that Nikko was not an only child. We also learned that four of his siblings suffered his same fate."

The other children — one known to be deceased, the others presumed so — have been identified as:

The remains of the latter three infants have not been located, said Lopez, who due to the ongoing investigation declined to answer questions regarding how the infants died and whether they shared the same mother or have any surviving siblings.

A motive for the alleged killings also remains under investigation.

The probe began with a fisherman's grisly discovery of an infant's badly decomposed body in a weighted-down metal cooler on March 29, 2007, in Conway Slough east of Woodland. According to a coroner's report, the baby had suffered blunt-force trauma, and was wrapped in a Winnie-the-Pooh blanket before being placed in the cooler along with metal rotors, a brick and U-shaped pieces of metal.

When the genetic material failed to match up with anyone listed in CODIS — the national Combined DNA Index System — the state Department of Justice's DNA lab expanded its search to include kin-based relationships, ultimately identifying Perez as a probable paternal match, according to DOJ Chief Edward Medrano.

At the time of his arrest, Perez was just days away from being released from Kern Valley State Prison in Delano, where he has been serving time since August 2010 for a Yolo County vehicle theft and reckless evading conviction.

"The fact that he was not allowed to walk out of that prison a free man cannot be overlooked," Lopez said.

Perez has been transferred to the Yolo County Jail, where he awaits his arraignment at 1:30 p.m. Tuesday on multiple felony charges including five counts of premeditated first-degree murder and the special circumstances of lying in wait, torture and multiple murders.

A criminal complaint filed Jan. 21 also includes multiple counts of assault on a child and charging enhancements for a prior conviction — a 1990 felony assault in Merced County.

Perez declined an interview request Monday from The Davis Enterprise.

Yolo County District Attorney Jeff Reisig said the charges make Perez eligible for either life in prison without the possibility of parole or the death penalty, the latter still being considered despite Gov. Gavin Newsom's current state moratorium on capital punishment.

Reisig noted that many doubted the case would ever be solved. But on the heels of several other cold-case arrests made as a result of advances in DNA science — including the East Area Rapist/Golden State Killer case that has Davis ties — the DA's Office launched a DNA cold-case division.

That, in turn, led to a countywide cold-case task force that got the unidentified infant's case a fresh look.

"Today we are here because as seen in other cases from around the nation, the science and power of DNA has shown that monsters and killers cannot hide forever any longer," Reisig said at Monday's news conference, adding that investigators are still seeking witnesses who might have information about Perez and his children — including other possible offspring that have yet to be accounted for.

"If they're out there, one of our hopes is this will jog somebody's memory, and they will come forward tell us what they know," Reisig said.

Here is the Davis Enterprise's coverage of the infant's discovery, from April 1, 2007:

The remains discovered last week in an irrigation slough east of Woodland were those of an infant no more than 3 months old, Yolo County sheriff's officials said Friday.

Now the sheriff's department is enlisting a forensic anthropologist from UC Davis to determine more about the baby, such as its exact age, race and gender, and possibly its cause of death.

Investigators also are on the lookout for a potential murder suspect.

"We are treating the case as a homicide, unless it's proven otherwise," Lt. Jeff Monroe said Friday following an autopsy on the badly decomposed remains, which had been reduced to just bones. "That's how much importance we're placing on finding out what happened."

Monroe said the infant's body was inside a container that had been submerged in Conway Slough, near County Road 22, for at least six months when 31-year-old Brian Roller of Rio Linda found it while bowfishing Thursday afternoon.

"That pretty much ruined the day," Roller, a plumber, said Friday night in a phone interview. "I just hope they can catch somebody and figure it out."

An avid fisherman, Roller usually bowfishes in the Natomas area but said he is "always looking for new fishing water." He said he spotted the slough one day while en route to a plumbing job in Woodland and thought it would be a good source for large carp.

At about 3:30 p.m. Thursday, Roller aimed his bow and arrow at what he thought was a fish swimming in the murky water, and fired.

"It obviously wasn't a fish, because it didn't swim away with the arrow," Roller recalled. He said he began pulling at the item by the string attached to the arrow, but it was very heavy, and he was unable to bring it ashore without breaking the string.

Instead, Roller retrieved a shovel from his truck and used it to pull the container to the slough's bank. Upon opening it, he found some miscellaneous heavy objects — which apparently had been used to weigh down the container — and the remains, wrapped up in a blanket.

"I pretty much assumed they were human by the way they were packaged together," said Roller, who did not elaborate. "As soon as I saw the first truly identifiable bone, I called 911."

Monroe, the sheriff's lieutenant, has declined to describe the container, saying that information is a crucial part of the investigation. He did say that the container also held a decomposed diaper, indicating the infant had been cared for at some point.

Several weeks later, sheriff's officials announced the agency had submitted the infant's DNA to the Department of Justice in hopes of obtaining an identity.

Monday's announcement comes roughly a year and a half after the Yolo County Coroner's Office announced the solving of two other cold cases through DNA science — that of a man who drowned in the Sacramento River in 1987 while attempting to save several other people whose vehicle had plunged into the waterway, and a Sacramento woman whose body was disposed of in the Yolo Bypass in 1984 after she was killed by shotgun fire.

Lopez, the Yolo County sheriff, credited not only state of the art technology with the break in the case, but also "the human element" of the law-enforcement partners who spent countless hours searching for a baby's killer.

"This case revealed unspeakable evil, and these acts ignited a resolve in the hearts of all involved to bring justice to vulnerable and innocent victims of this case," Lopez said.