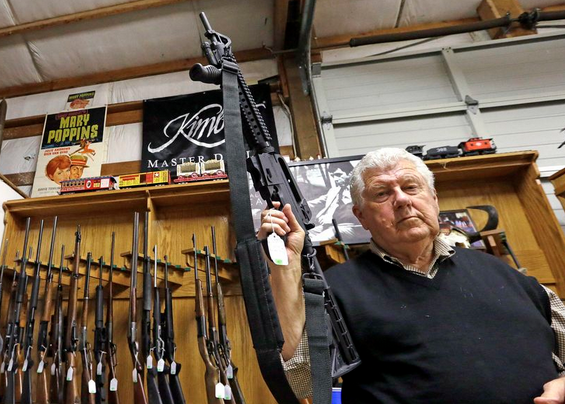 SEATTLE (AP) — The City Council in Spokane, Washington, has passed an ordinance prohibiting police from selling confiscated firearms, citing an Associated Press investigation that found that some guns sold by law enforcement were used in new crimes.

"Disposing of long guns and assault rifles is a sensible approach," Councilwoman Candace Mumm told The Associated Press in an email after the 6-1 vote on Monday night. "Instead of spending time recycling weapons, our police staff can get back to the primary mission of solving crimes and protecting the public."

The Spokane Police Department has sold 311 firearms since 2011, spokesman Officer John O'Brien said. The AP investigation went back to 2010, which included 25 sold that year and brought Spokane's total to 336 since 2010. The department sold its confiscated long guns through an auction house in Post Falls, Idaho, he said. The agency had been destroying forfeited handguns under an ordinance passed in 1993.

The Spokane City Council is the second political entity to order a ban on law enforcement gun sales, citing the AP's investigation into 6,000 guns sold by law enforcement between 2010 and 2017.

The Metropolitan King County Council passed an ordinance on Oct. 2 that prohibits the sheriff's office from selling forfeited firearms.

"While the practice of selling these firearms back into private hands is legal, a yearlong Associated Press analysis published in January 2018 found more than a dozen firearms sold by law enforcement agencies in Washington since 2010 later became evidence in new criminal investigations," the council said in its report supporting the ordinance. "The report noted that weapons auctioned by the Washington State Patrol, Kitsap, Pierce and Thurston counties and the Aberdeen, Bonney Lake and Longview police departments were used in the commission of crimes or to commit suicide."

"The books show just a few thousand dollars a year are netted out after paying for the auction fees and the 10 percent fee to the state," Mumm said before the vote. "This amount does not take into account the expenses that are incurred by the police department for staff time to secure, catalog, process, transport and document the weapons. Nor does it account for the trade and fund balances.

"We may actually be costing the city coffers by reselling and recycling the guns."

Several members of the public spoke against the ordinance based on their support for the Second Amendment of the U.S. Constitution. But Phyllis Holmes, who was on the Spokane City Council when it passed the original measure requiring the destruction of handguns, supported the plan.

When the council passed that ordinance 6-1 in 1993, it conveyed the panel's "determination to reduce the level of violent crime associated with firearms," Holmes said. "Circumstances were a little different then. We didn't see on the streets the kinds of weapons that we now see."

"It has troubled me the past few years that we didn't include all guns," Holmes said. "We perhaps weren't thinking forward enough in terms of what might happen. Passage of this measure tonight would bring consistency to our position on the management of confiscated weapons."

Without further discussion, the council passed the ordinance, which states: "The City of Spokane intends to do all it can to prevent and reduce violent crime in Spokane and has determined that destroying all seized or forfeited firearms rather than reselling them to the public or to gun dealers is a simple, sensible and effective way to reduce access to firearms and help reduce and prevent gun violence."