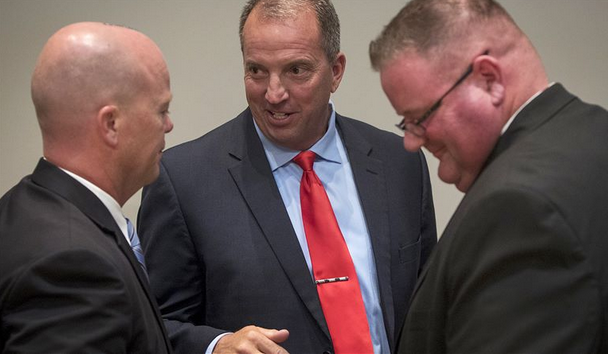 OGDEN — The three hopefuls running for Weber County sheriff seem to agree on at least a couple of things — retention and recruitment of deputies rate among the top issues the office faces.

Assuring positive morale within the department and public trust in light of a controversy over tainted evidence in the office's evidence room, too, are major concerns.

"We're just losing officers quickly and we need to stop that," said Kevin Burns, vying for sheriff along with David MacInnes and Ryan Arbon in a race that will be decided in the June 26 Republican primary.

Boosting pay is key in keeping deputies, Burns thinks, and streamlining government and seeking areas to cut spending should be the first place to find the money — not tax hikes. But the county should focus mainly on staying competitive with other Weber County law enforcement agencies, not necessarily agencies farther south in Salt Lake County.

Arbon, the police chief in Perry in Box Elder County, sees the office's relationship with the public as the main focus.

"The priority for me is restoring public trust in the sheriff's office," he said. Key in that is addressing concerns among some prompted by things like revelations earlier this year that a sheriff's employee had stolen drugs from the office's evidence room, potentially tainting criminal cases. But fighting turnover of officers and assuring a steady stable of law enforcement officers is also important.

Funding for pay is "part of the equation," Arbon said. Moreover, he'd "invest everything I can" into employees and their families, making sure sheriff's office employees are in roles that are satisfying for them, among other things.

MacInnes, a sergeant in the Weber County Sheriff's Office, puts employee retention at the top of the list, saying pay is a factor but hardly the only thing. The new sheriff also needs to address department morale, build relationships and foster employee development.

The three candidates are all Republicans, and with no Democratic contenders in the June 26 primary, the winner will likely become the next sheriff, barring the unexpected. Sheriff Terry Thompson, the two-term incumbent, isn't seeking re-election.

"I was the supervisor so I certainly have some responsibility for what happened in there," Burns said.

However, he believes he's being made a scapegoat, maintains that he's "absolutely not" the chief culprit and said voters with questions should take his entire law enforcement career into consideration, not just the evidence room blow-up. A criminal probe into the evidence room issue continues along with an audit to determine what Weber County criminal cases may have been tainted.

"I would say look at my overall resume, my overall history in management and leadership," said Burns, who retired as a chief deputy in the sheriff's office's corrections division.

After retention of officers, he said his next priority would be making sure the evidence room is secure. Part of the answer will come from assuring that evidence room personnel are properly trained and purging old evidence once it's no longer needed to minimize clutter.

Arbon said one of the biggest questions he gets from voters is about the evidence room controversy. He said the answer to help prevent a recurrence would be more regular audits of the evidence and increased oversight. But he refrained from comment on whether Burns' role should bear on his candidacy, saying it's up to voters to decide at the ballot box.

MacInnes said the sheriff's office is actively taking steps to address the evidence room situation. He, too, declined comment on whether the controversy should bear on Burns' bid.

The Standard-Examiner has documented numerous cases of unreported deaths in jails in Weber and Davis counties, some of them by suicide.

To prevent suicides, in particular, MacInnes said jail personnel need to get training to help them identify signs that inmates may be depressed or suicidal so they can get help before they hurt themselves.

Burns said communication with families of struggling inmates would be key, letting them know "what's going on when their inmate has an issue." And when an inmate does kill himself or herself, the key focus — as with suicides outside the jail system — should be informing family, being respectful of their privacy and not necessarily publicly broadcasting the news.