Bo Williams, prosecutors said, was accused of removing the drug
methamphetamine from a storage area while he was still a Spencer police
officer. He resigned as a police officer in December. He resigned as the
county sheriff when he pleaded guilty in court. 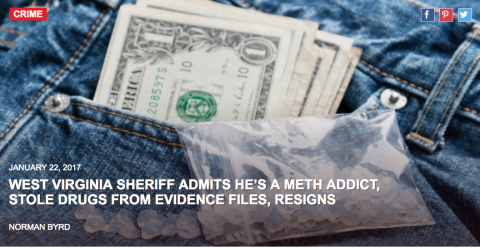 A newly elected county sheriff in West Virginia who told authorities he was a meth addict pleaded guilty to a felony this week after admitting he stole methamphetamine from a police locker. He was charged with stealing the drug in early January. According to Roane County prosecutors, Bo Williams, who was elected county sheriff in November, entered a guilty plea of entering without breaking in Roane County Circuit Court.

Meth was found in Williams' desk and police vehicle, according to the criminal complaint against him. It also revealed that several evidence bags found with Williams displayed case numbers that corresponded to missing evidence from the files.

The complaint noted that there was more than a thousand dollars worth of evidence involved, and Williams was initially charged with grand larceny.

"It's an example of what drugs like meth have done to our communities," Downey said. "Some people have a picture of what a drug addict looks like. It shows that it can be anybody."

This was made all too evident in an article in Vice magazine in January 2015, which followed a meth lab clean-up crew and shed light on the "changing drug habits of rural, white America." Instead of cities and towns hit particularly hard with what is referred to as "the meth scourge" and their tell-tale dilapidated and boarded-up buildings, the crew's proprietor, Jennifer McQuerrey Rhyne, says there have been only a few places resembling something out of Breaking Bad. What bothers her, she said, was that most places looked utterly normal.

Worse, children have lived in about 80 percent of the places she's been paid to clean up.

McQuerrey Rhyne has lived in West Virginia all her life and says she knows people who've used meth, "people I would have never expected until they told me. Contractors use it to stay up three days to finish a deadline."

But West Virginia is seeing an explosion in the popularity of all sorts of hard drugs, such as Oxycontin and heroin. Salon offered up an article in 2012 that named Kermit, West Virginia, as the epicenter of the prescription drug epidemic in the United States. Drug enforcement officials say that shutting down "pill mills" was like playing Whac-A-Mole, making West Virginia the "pill-popping capital of America" and many of the state's residents "pill-billies."

As of March 2014, West Virginia had the highest rate of drug overdose deaths in the United States, according to the Charleston Gazette-Mail. From 1999 to 2010, the number of overdose deaths increased sixfold in the state.

Jennifer McQuerrey Rhyne told Vice she believed that, given what she had witnessed at clean-up sites, the popularity of hard drugs was rising simultaneously in the state and it's worked its way into the very fabric of normal life.

But asked why meth itself was so popular, she replied simply, "Because it gets you high."

Prosecutor Downey said that Bo Williams, as part of the plea agreement, gave up his law enforcement credentials.

The Roane County Commission has a month to appoint a replacement for the deposed county sheriff. Prior to his resignation Wednesday, the commission had already begun removal proceedings.

Tweet
How do you feel about this post?
Happy (0)
Love (0)
Surprised (0)
Sad (0)
Angry (0)
Tags:
assault  kits Chain of Custody move block Big Three: altered evidence
Audit: Acadia Parish forfeiture thefts more than i...
Pipe bursts in evidence room at LMPD HQ
Comment for this post has been locked by admin.