What happens to drugs, property and other assets seized by law enforcement?

Seized evidence is stored by Metro in an 83,000-square-foot evidence vault— 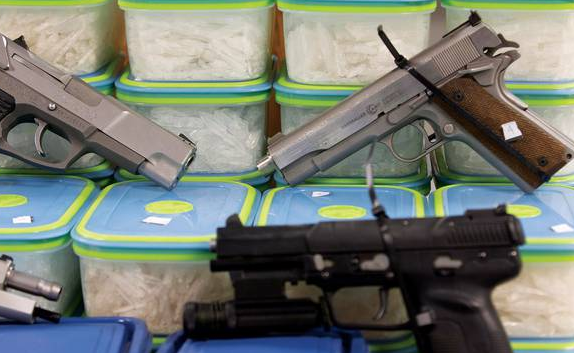 It's the law enforcement equivalent of a prized taxidermy moose hanging on the wall of a hunter's den. Police departments tout their seized hauls of drugs, firearms, cash and other assets on social media after a major bust, displaying photos of what they took off the streets and usually delivering a message.

"A proactive officer's contact with the occupant of a parked suspicious vehicle yielded eight felony charges for possession of methamphetamine, heroin and several firearms-related offenses, possession of burglary tools, and misdemeanor drug paraphernalia," Mesquite police posted to Facebook last month. "This is more proof that guns and drugs don't mix! Great job, officer for taking another dangerous criminal with guns off the street!!"

The largest drug bust in Nevada history occurred in 2011, when law enforcement cracked a drug ring in Las Vegas that netted more than $5.7 million worth of heroin and methamphetamine. Officers also seized $280,000 in cash, nine vehicles, five handguns and one shotgun.

While investigators weren't certain whether the vehicles were involved in violent crimes, asset forfeiture laws allow police to seize any private property they believe was used in a crime, even if the suspect hasn't been convicted. But what happens to it from there?

Seized evidence is stored by Metro in an 83,000-square-foot evidence vault—which is really more like a warehouse—until a case is adjudicated, Melisse Huffmaster, the department's evidence vault director, explained. These cases, she said, can sometimes take years to close, which can make the task of storing drug evidence quite difficult.

"We often run out of space," she said. "It's not an uncommon problem; it's a nationwide issue."

Huffmaster said the lack of space has pushed agencies to lobby for more policies to get rid of evidence more quickly. Marijuana is the only type of drug evidence that can be destroyed before a case is adjudicated, according to Huffmaster ("That's because marijuana takes up a lot of storage space"). Prosecutors instead use samples or photos of the evidence in court.

When drug and paraphernalia evidence is finally ready to be destroyed, it's outsourced to waste management companies like Clean Harbors and Covanta, Huffmaster said. Facilities must follow strict Environmental Protection Agency standards when burning illegal contraband to mitigate toxic emissions.

"And then, of course, you have paraphernalia in these packages as well," Huffmaster said. "You have to have a facility that has the capability of cleaning the emissions and withstanding the heat."

The seized drugs can also be used by the department for K-9 training, Huffmaster said. Metro has 15 detection dogs, nine of which are trained to locate marijuana, cocaine, methamphetamine and heroin, officials said.

State law dictates that officers can't seize property for forfeiture purposes if the owner didn't knowingly consent to the crime. That's why a lot of drug dealers or those involved in illegal activity rent cars and houses, according to Las Vegas criminal defense attorney Michael Pariente. That way, their own cars and houses can go unseized, and the original owner or landlord can claim ignorance of the crime. But ignorance isn't always a foolproof defense.

One client Pariente represents was sentenced to five years in federal prison late last year when marijuana being illegally sold in Iowa was traced back to plots of land he owned.

Pariente said his client, Las Vegas resident Oliver "Sonny" Maupin, was following Oregon statute to legally grow marijuana within the state, but that his girlfriend—unbeknownst to him—had been taking the crop from Oregon to sell in Iowa, where the sale and use of recreational marijuana is not legal. Nevertheless, a jury found Maupin guilty, because growing marijuana remains illegal under federal law, Pariente said.

Pariente said he is in the process of appealing the case but is doubtful his client will get his land back even if the charges are dropped. "The thing about forfeiture laws is that they're very draconian," Pariente said. "The Supreme Court ruled that they don't violate double jeopardy. So the government can put you away in prison and go after your land and property."

Pariente said fighting forfeiture laws can be especially difficult on defendants. Because prosecutors don't have to prove their case beyond a reasonable doubt, only needing to present "clear and convincing" evidence—a lower standard—that the property was knowingly used by the owner in a crime.

Pariente said the key in fighting forfeiture cases is proving law enforcement did not follow correct protocol when seizing assets, which in most cases requires an attorney. And that cost can often be more than the property's value.

In 2018, nearly $1.6 million in personal property—houses, cars, cash, firearms and more—was seized in Nevada, according to the U.S. Department of Justice. State law dictates that law enforcement investigate each case to determine if seizure of the property is warranted, rather than just seizing all property indiscriminately, Officer Lawrence Hadfield said.

Property will not be seized for forfeiture purposes if the owner is neither consenting nor a conspirator to the felony, or if the property is stolen. So, if a drug dealer is driving a stolen vehicle when captured, officials won't take the car for forfeiture.

The items, after the suspect is convicted, are sold at auction with proceeds going to policing efforts. Seized cash also goes to law enforcement.

In 2015, a proposed Nevada bill would have required proof of criminal conviction or a plea deal before cash and property could be seized. But the conviction requirement was dropped, and the bill was signed into law by then-Gov. Brian Sandoval, dictating that seized money and property be returned to an individual after trial if charges are dropped or dismissed.

Another bill in 2017 would have again included a conviction or plea deal requirement. It would have also directed forfeiture proceeds to go toward education rather than the law enforcement agency. But the bill died in the Senate Judiciary Committee.

In 2019, another bill was introduced to reform Nevada's civil asset forfeiture laws. It passed the Assembly 34-6 but also died in the Senate Judiciary Committee.

What happens to drugs, property and other assets seized by law enforcement? - Las Vegas Sun News