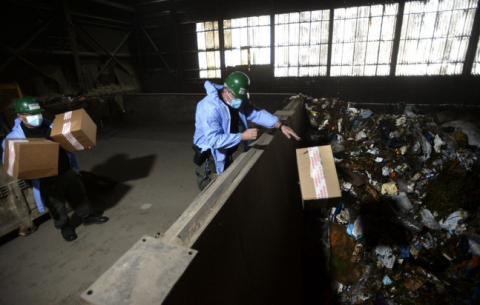 The city has extended its contract to run SERRF until 2024, but beyond that date, the future of the facility remains uncertain 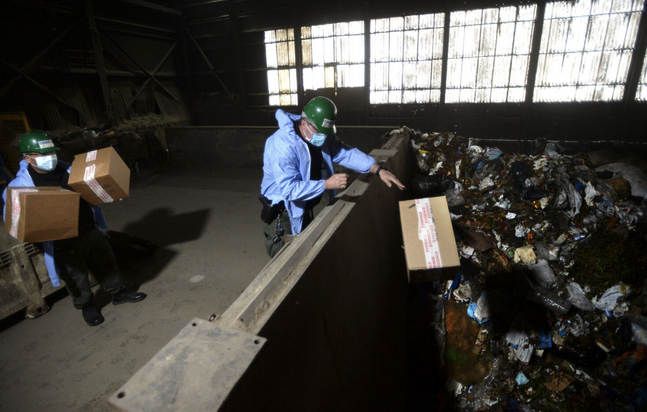 After over three hours of driving from Wasco State Prison, a prison complex near Bakersfield that currently houses around 3,000 inmates, officers Thomas Miller and Oscar Navarro make their way up six flights of stairs to the large, odorous trash chute of the Southeast Resource Recovery Facility (SERRF) on Terminal Island.

The two correctional officers came to Long Beach to dispose of drugs. Prisons, police departments and federal law enforcement agencies all frequent the waste-to-energy plant to burn their seized contraband.

In total, the power plant has agreements with approximately 200 law enforcement agencies, with officers from 35-40 agencies visiting the plant per month, according to Bureau Manager Alan Foley.

But while law enforcement agencies seize more and more drugs every year, the future of the trash-burning, energy-producing facility remains uncertain. Currently, SERRF is one of only two facilities in the state offering that service and its contract to operate expires in 2024.

After its 30-year contract with Southern California Edison expired in 2018, the plant entered a power-purchasing contract with the California Independent System Operator, the entity tasked with operating and maintaining the supply and demand balance of the state's transmission grid.

The revenues from that agreement, however, represent a fraction of the earnings made from the contract with Southern California Edison.

While the power plant continues to burn 400,000 tons of trash, generating enough electricity to power 35,000 homes a year, its revenues are down to approximately $6 million, according to Foley, a quarter of the $24 million it once earned from the investor-owned utility.

The city has extended its contract to run SERRF until 2024, but beyond that date, the future of the facility remains uncertain. "We don't have any answers yet," Foley said. "There's a possibility that it will close and there's a possibility it will stay open."

Meanwhile, law enforcement agencies have as much of a need to get rid of confiscated drugs as ever. The amount of narcotics U.S. Customs and Border Patrol, the power plant's largest law enforcement client, seized in California has increased steadily over the past three years. Last year, the agency's field offices and border patrol stations in the state confiscated 264,000 pounds of drugs, according to its drug seizure statistics for the fiscal year.

Cannabis accounts for the vast majority of contraband seized, with methamphetamine and cocaine coming in second and third, respectively.

SERRF doesn't closely track the amount of drugs it burns each year, but Foley estimated the current average to be about 450,000 pounds and confirmed that the weight has increased in recent years. According to a Los Angeles Times article published in June 1992, the facility expected to burn an estimated 50,000 pounds of drugs per year at the time—a fifth of the weight it burns today.

If the power plant were to close down, law enforcement agencies might find themselves in a pinch, similar to the one they were in when the state approached SERRF to start the drug-burning program.

Before law enforcement agencies came to SERRF—or its sister facility in Stanislaus County—every department followed its own policy on disposing of confiscated drugs, with some burning them in open pits in the desert, in crematoriums or hospital incinerators.

"People would try to do it any way they can, because there was no guidance," said Joseph Latta, a retired police lieutenant and president of Evidence Control Systems Inc., a company that advises police departments across the country on handling evidence.

Then in the late 1980s, California's environmental agencies decided that cocaine and certain other drugs were hazardous substances that needed special treatment. Following regulations passed in 1989, the incineration of cocaine was completely banned for a period of time, causing confiscated drugs to pile up in evidence lockers across the state.

"They basically outlawed the burning of narcotics, certain kinds of incinerators," Foley remembers the regulatory environment of the time. "So where they used to take them, they couldn't take them anymore."

In 1992, four years into the waste-to-energy plant's existence, Foley said the power plant received a letter from the state asking them to allow law enforcement agencies to dispose of seized drugs in their incinerator. "This is how we were approached: we need to do this, there's no place for us to go, our evidence lockers are getting full," Foley said.

Since then, SERFF has been the go to place for California law enforcement to incinerate narcotics.

"I cannot remember ever going anywhere else," said Latta, who worked for the Burbank Police Department for 30 years, including in the property and evidence section, before becoming a consultant in the field. "It's just been a long-time fixture."

Property and evidence disposal is often a neglected portion of many police departments' responsibilities, Latta noted, leaving the shelves of evidence lockers in some departments lined with drugs seized anytime from the 1990s to today.

But for federal agencies like Customs and Border Patrol, seized narcotics can quickly fill entire warehouses, making disposal a higher priority. Without SERRF, all law enforcement agencies with jurisdiction in California would have to find other options, an issue they haven't dealt with in three decades. "Here in the state, nobody's even looked at anything else since the 1990s," Latta said.

With the future of Long Beach’s waste-to-energy plant uncertain, so are law enforcement’s options for disposing of seized drugs - Long Beach Business Journal