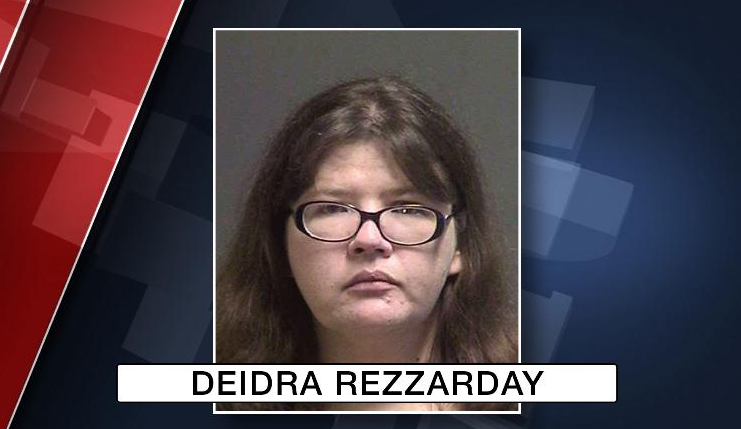 KALOOSA CO. (WTVY) — The Okaloosa County Sheriff's Office today charged an OCSO civilian employee with grand theft of a controlled substance and possession of a controlled substance without a prescription. 40-year old Deidra Rezzarday, a Property Room Technician, was placed on immediate suspension without pay on Thursday August 24th following the launch of a criminal investigation. She was not allowed access to any OCSO computers, resources, or facilities.

Investigators say Rezzarday committed criminal violations in connection with prescription drugs stored in Evidence that had been designated for destruction. Rezzarday admitting to taking medications from the Purge/Disposal area on four separate occasions for personal use. The theft appears to be limited in scope, involving only recent items designated for destruction, however in an abundance of caution, Sheriff Larry Ashley has ordered an internal audit of all items in Evidence. There are no indications any of the drugs (Xanax, Ambien, Clonazepam) involved criminal investigations or had any evidentiary value. It is also believed Rezzarday acted alone.

A woman that had worked with the Okaloosa County Sheriff's Office for more than a decade has been charged with stealing prescription drugs from the Sheriff's Evidence room.
http://www.wtvy.com/content/news/Woman-charged-with-stealing-drugs-from-Okaloosa-County-Sheriffs-442165713.html
Tweet
How do you feel about this post?
Happy (0)
Love (0)
Surprised (0)
Sad (0)
Angry (1)
Tags:
altered evidence assault  kits Chain of Custody Big Three: prescription pills
A DEA officer had a wild affair with a convict — l...
Former correctional officer charged with flushing ...
Comment for this post has been locked by admin.