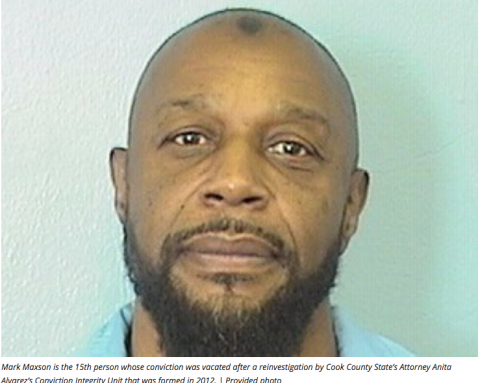 A Chicago man released from prison after DNA evidence showed he was wrongfully convicted of a 1992 murder is seeking $54 million in a lawsuit his attorneys filed Friday against the city.

Police said Maxson confessed to the crime, but he said detectives beat him into giving a confession.

No physical evidence linked him to the grisly sexual assault and slaying of the boy, but a jury convicted him anyway.

Maxson was arrested in 1992 shortly after the killing and held in the Cook County Jail until 1994 when he was sentenced to life in prison.

After Maxson was released from prison on Tuesday, Wade was charged with murder in the boy's death. Prosecutors said he confessed to the crime and wrote apology letters to Maxson and the boy's family.

"Mark Maxson is one of hundreds of African-American men in Chicago who were tortured into giving false confessions by Burge-era officers," said the lawsuit filed in U.S. District Court by Maxson's attorneys, Elliot Zinger and Larry Dreyfus.

Jon Burge was a Chicago Police commander who was fired in 1993 and convicted in U.S. District Court in 2010 of obstruction of justice and perjury for lying under oath about the torture of suspects.

The lawsuit claims that detectives threatened, slapped and kicked Maxson and one of them pointed a gun at him.

"Stories of exoneration of such torture victims have appeared in the media so frequently that many of us have become desensitized to their impact upon us as a civilized society as well as to their historical significance, Maxson's lawsuit said.

"Even amidst all of these highly publicized exoneration cases, Mark Maxson's case is both unique and quite simply, astonishing."

The lawsuit seeks $36 million in compensatory damages and another $18 million in punitive damages that the detectives in the case would have to pay personally if found liable.

On the day Lindsey went missing in 1992, Maxson told a TV reporter he bought potato chips for the boy at a Far South Side liquor store and told him to go home. The next day, Lindsey was found dead in an abandoned garage — and detectives focused on Maxson as their main suspect.

Although police said Maxson confessed, no physical evidence tied him to the crime. Blood evidence, in fact, excluded him. At his sentencing, he told Cook County Judge Daniel Locallo he was innocent, but Locallo sent him to prison for life, saying he was "malignant."

In 2009, Maxson filed a "pro se" post-conviction petition himself. His attorneys later joined the case, persuading the court to approve DNA tests of Lindsey's clothing and other items. Bloodstains on the boy's pants and shirt matched Wade's DNA, prosecutors said.

Maxson is the 15th person whose conviction has been vacated after a review by the Cook County state's attorney's Conviction Integrity Unit, which was formed in 2012.

A Chicago man released from prison after DNA evidence showed he was wrongfully convicted of a 1992 murder is seeking $54 million in a lawsuit.
http://chicago.suntimes.com/chicago/wrongfully-convicted-man-sues-city-for-54-million/
Tweet
How do you feel about this post?
Happy (0)
Love (0)
Surprised (0)
Sad (0)
Angry (0)
Sheriff denies he misled anyone about destroyed ev...
First Sexual Assault Survivor’s Bill of Rights Pas...
Comment for this post has been locked by admin.