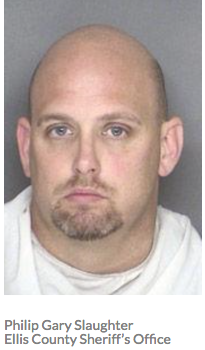 Former ECSO Lt. Philip Gary Slaughter II worked with inventory and records in the Evidence Room. He resigned from the sheriff's office shortly before being arrested in April 2016, according to the MidlothianMirror.com.

According to a factual resume, Slaughter admits working in the ECSO Evidence Room from October 21, 2001 to March 28, 2016, where he reorganized property and had access to seized firearms, including some considered evidence in criminal matters.

In November 2015, Slaughter obtained a court order to destroy hundreds of firearms. The record of which firearms were to be destroyed was created and maintained by Slaughter, who, according to the factual resume, got the court order knowing he would not destroy all of the guns; he would instead take them and use them for his own personal gain.

Slaughter also admits conspiring with an ECSO co-worker identified in the document only as Person A, but whose identity is known by the U.S. Attorney. Slaughter says he and Person A sold or pledged as security 40 firearms stolen from the property room.

In a separate factual resume, former Ellis County Sheriff's Deputy Thomas Glen Smith, who also worked in the property room, admits he and Slaughter sold or pledged as security the 40 stolen firearms.

Two of the firearms were pawned in November 2015 and three more in April 2016 at Ennis Pawn and Loan; Slaughter received a $500 loan from the pawn shop using a Taurus PT140 Pro pistol as collateral. The Taurus and two other guns pawned were on the court's Destruction Order, while the remaining two were supposed to be in the ECSO Evidence Room.

Slaughter and Smith also pawned firearms in November and December 2015 at Pawn Store & More, where Smith secured a $750 loan using a Auto-Ordinance Thompson 1927A-1, .45 caliber semi-automatic rifle — also known as a Tommy gun — as collateral, according to a factual resume. Each of the weapons in these instances was either on the Destruction Order or was supposed to be in the property room.

Slaughter and Smith both admit selling guns from the property room to other stores, including SWFA Outdoors, and using Facebook accounts to sell to individuals, family members, and acquaintances.

At least 10 firearms taken from the property room were seized when Slaughter was arrested at his Midlothian home in April 2016.