3 detectives accused of tampering with evidence after police-involved shooting 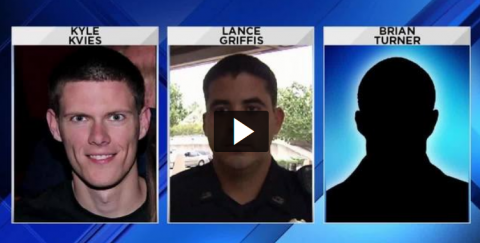 Sheriff Mike Williams said the detectives removed three cans of beer from their undercover vehicle after the shooting, but before other investigators arrived. Williams said the vehicle had become a crime scene, and removal of anything that could be considered evidence is against the law.

Lance Griffis, Bryan Turner and Kyle Kvies are charged with tampering with evidence and conspiracy. Griffis, 33, has been with the Sheriff's Office for 11 years; Turner, 48, for 9 years; and Kvies, 26, for 3 years.

"We found what we found today because we were looking for that. We chose not to wait on taking action on that," Williams said. "We have a clear-cut case of officers violating the law. We still have a long investigation to do in terms of the police shooting, but I chose today to take the step of taking action against the officers who we clearly see violating the law in this case."

Recorded evidence indicated that the detectives got rid of beers that were in the car, Williams said. Under JSO guidelines, undercover officers can use alcohol as props, but not drink on the job.

"I will always respond just like this when someone wearing this badge breaks the law," Williams said. "I will do that every single time. This community and the men and women of JSO will always be able to count on me to protect the integrity of this organization."

The officers were arrested, then released on their own recognizance.

Williams did not say which of the three officers fired the shots that night. He couldn't say if that officer had been drinking because no blood alcohol tests were given that night, since there was nothing to indicate they had an open container of beer in the car.

News4Jax crime and safety analyst Gil Smith said it was not against JSO rules for undercover officers to consume alcohol when he was on the force if it was important to keep their cover.

"The conspiracy comes in when they made the decision together to alter the crime scene and get rid of the beer. You can't move or change anything. It has to stay exactly as is. After the shooting, the beer is now evidence," Smith said.

According to JSO personnel records, a December 2016 citizen complaint against Kvies for failure to conform to work standards was sustained, and he was given informal counseling.

News4Jax also learned that Kvies played baseball for the University of North Florida.

Griffis was investigated in July 2012 after a citizen complaint of false arrest. That ended with an information letter placed in his personnel file. Griffis was also given informal counseling and remedial training after a July 2016 accident in a police vehicle.

In 2011, News4Jax interviewed Griffis after he saved the life of a 5-month-old baby. He was headed to work when he was flagged down by a mom downtown who said her baby wasn't breathing. Griffis performed CPR, and the baby survived.

News4Jax has not yet received Turner's personnel file.

Smith said there are a lot of dynamics at play in the case because it involves two veteran detectives and one non-veteran who's only been with JSO for three years, meaning he is still new to the narcotics unit.

"Sometimes, with the younger officers, the decision-making is not quite there. It takes time to develop that," Smith said.

As for what's next, Smith said, the three officers will go before the Sheriff's Office Response to Resistance Board and have a chance to tell their sides of the story.

"Now these officers, because of the shooting, will face the RTR board and have to explain the justification for the shooting. Even though they had alcohol and moved it, it still doesn't take away their right to defend themselves. So they will review that separately from them having that open container. But I don't think that will come into play. To review the shooting, they are looking at what led up to the shooting, explaining their actions to justify the shooting," Smith said.

After the sheriff announced that three of his own officers had been arrested, Fraternal Order of Police President Steve Zona asked the public to withhold judgment of the detectives until all the facts of the case are known.

Zona believes that the arrests were premature, saying the sheriff should have waited until the investigation was complete.

"Even the sheriff said that they are (allowed) to have those props in cars because our detective work is a very dangerous area, and they have to fit in. The people they deal with have to believe they are not police officers. That is why they carry those props," Zona said. "The night of the shooting, these detectives spoke with a staff member, an appointed staff member from the Sheriff staff and lieutenants, sergeants and the very detectives that reported the issue with the beer can and not one of them, not a single person that had contact with those detectives that night say that they smelled of alcoholic beverages, said they showed any kinds of impairment, and that would've come out with all the people they spoke to, and that didn't happen."

Zona said that if they removed the alcohol from the car, it was a bad decision, but it should have been handled as a departmental violation, not a criminal act.

"I would've personally rather have seen them finish the investigation first -- the entire investigation -- instead of rushing to something like this," Zona said.

Zona added that the officers' reactions after the fact may have have been altered based on the traumatic event, in which one of them had just taken a life in self-defense.

"That was more stress in one night than most people experience in their entire life. When they have a pistol pointed at them, after an incident like that, it is scientifically proven your brain doesn't process things the way a normal person does. You're trying to catch up and process what just occurred," Zona said.

Randy Reep, an attorney not affiliated with the case, said he believes there are two arguments against that theory.

These are professional narcotics detectives that are trained in that very thing. And two, you and I may react emotionally to an event in a very odd way, that is certainly understandable, but it would be very odd for you me and your cameraman to all react the same way to this unusual stress.

So being in an altered state of mind where three people get together to cover something up, that loses a little bit of that genuineness there if we are all behaving in concert," Reep said.The FOP plans to support the officers in their legal defense and fight to keep their jobs. It will be up to the officers whether they'll seek counsel at FOP or hire their own attorneys. Reep said the friction between FOP and JSO that has been caused by the arrests is a good thing. "Sheriff Williams, there's not a whole lot of guys with a lot more integrity at all in holding people to task.

The unions job is also to hold Sheriff Williams and the police department to a standard, to bring charges, or termination, or otherwise against their officers. There is a natural conflict there, and the cool thing about conflict, we are probably able to resolve what are the actual facts -- good or bad," Reep said. Drug raid ends in suspect's death The officers were undercover trying to buy drugs Feb. 6 on West 5th Street when 22-year-old Jerome Allen pointed a replica handgun at a narcotics detective and was shot and killed, according to the Sheriff's Office.

A second man who was involved in the undercover drug buy that led to the shooting was arrested, charged with possession of cocaine, and could face more charges.When Allen pointed the gun through the open passenger window of the undercover police car parked on West 5th Street just before 10 p.m., the detective fired seven shots, hitting Allen in the chest and arm.Allen was taken to UF Health Jacksonville, where he died. The officer, who was not injured, was on administrative review pending a review of the case. Previous Jacksonville Sheriff's Office booking photo of Jerome Allen with photo of replica gun used Ron Lendvay, JSO director of investigations, said three undercover narcotics detectives were conducting a drug operation in the lower Myrtle Street area. Ronnie Brown, 57, was assisting the officers in buying $40 worth of powder cocaine and was out of the car when Allen came out of the shadows with what appeared to be a gun.

The gun turned out to be a replica.Jail records showed that Allen was arrested eight times over the last four years, most recently last October for petty theft.According to Smith, the arrests and possible convictions of all three officers could lead to lawsuits by Allen's family."If the person had been drinking heavily prior to firing the shot, that may come into play, especially in a civil suit. I'm sure there will be a civil suit because an attorney could come up and say the drinking may have affected their thinking. Had they not been drinking, they might have judged the situation differently and may not have fired their weapon. So at least in the civil suit, this may come in," Smith said.Reep agreed, saying Allen's family is in an interesting position at this point. "Any opportunity that you have to go after a governmental agency, specifically the police, who have just been involved in a shooting, anytime you can undermines the credibility of that, that is very concerning, very alarming," Reep said.News4Jax tried to contact Allen's mother on Thursday to get her reaction to the arrests of the officers, but was unable to reach her.

3 detectives accused of tampering with evidence after...

Three veteran Jacksonville Sheriff's Office detectives were arrested Thursday, stripped of their police authority and placed on unpaid leave pending dismissal in connection with a fatal...
http://www.news4jax.com/news/local/jacksonville/3-detectives-arrested-after-police-involved-shooting
Tweet
How do you feel about this post?
Happy (0)
Love (0)
Surprised (0)
Sad (0)
Angry (0)
Tags:
Big Three: evidence tampering Chain of Custody assault  kits altered evidence
Police auctions feature the weird and the mundane
After evidence goes missing, the tech is charged
Comment for this post has been locked by admin.