Police auctions feature the weird and the mundane 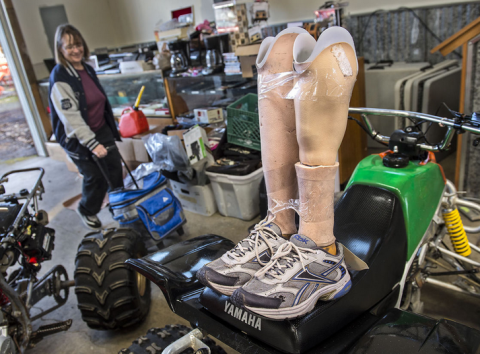 Ron Cryderman has seen some strange things in his 16 years working in the Longview Police Department's evidence room. The strangest appeared on his shelves early this year after police responded to a suspicious call.Someone left a pair of prosthetic legs unattended — shoes still attached."Someone didn't want them, I guess," said Cryderman, Longview Police evidence technician.

Anyone who does want them has a chance to bid on them at a police auction that starts at 11 a.m. Sunday by CTM Unlimited in Oakville, Wash."I think they have some kind of value – either a literal value or maybe artistic expression," Cryderman said.

"At the very least, someone will get a nice pair of shoes."Cryderman doesn't always know the story behind the items that come through the evidence room."Unless I take the time to go round up the reports, I don't know how we got it," he said.The pair of legs piqued his curiosity.

The regional auction house takes a 30 percent commission of the sales on most items. In previous years, the department used an online auction service, which took a 50 percent commission."I was working hard — I mean sweat coming off my brow," Cryderman said. "And they took half."Cryderman said he expects to hold three auctions this year. He and Kelso police officials say they don't get much money on the sales. The proceeds go into their respective cities' general funds and not directly back to the departments."It really isn't a big revenue generator for us," said Capt. Darr Kirk of the Kelso Police Department.Most of the items on the block are found property no one has claimed or no one has reported missing. Some are items recovered by police in other investigations such as property found in a recovered stolen vehicle or items found in a burglary investigation. A few items up for sale might have made their way to the evidence room through slightly more nefarious routes such as firearms, knives or BB guns found on someone who was arrested.Anyone looking for more storied items will likely be disappointed, Cryderman said.

"The only thing exciting or illicit about some of the stuff we auction off is they may have an evidence sticker still attached," he said. Older city fleet vehicles occasionally get sent to auction, but you won't find a getaway car on the block. The largest item Cryderman has overseen to auction is a riding lawnmower.Kelso has some older model ATVs for sale Sunday.Some are items that, in the wrong hands, might be weapons but, in the right hands, can be put to good use. Almost every suspect arrested for breaking into vehicles has a set of tools on them such as screwdrivers or wire cutters. A baseball bat in the hands of someone in a domestic violence call is a dangerous weapon."If you want to make a spiel for your little league team, (baseball bats) go for almost nothing,"

Cryderman said.These aren't bad items, he said, they just need a second chance to be used for good.Some unclaimed items that make it to the evidence room are ready for resale. Some are illegal. Others have little value.

"Sometimes things are damaged or smelly," Cryderman said. "You've got to be somewhat of an appraiser."Both departments make attempts to return items to the original owners, Cryderman and Kirk said.Items held by the department when someone is booked into jail are returned when possible."If they can lawfully have it and it wasn't part of the crime, we try to return it," Kirk said.All firearms held by the Kelso Police Department are sold in a separate auction by a third-party firearms dealer as long as they weren't illegally altered or reported stolen.

"We never put unsafe or illegal firearms back on the street," Kirk said.Knives that are considered offensive weapons based on blade length are destroyed by the department, he added.Longview has a few firearms on the block Sunday.Cryderman said he looks forward to the auctions."It clears the shelves," he said. "In my job, you don't get to see an ending of stuff much."

Police auctions feature the weird and the mundane | Local | tdn.com

Ron Cryderman has seen some strange things in his 16 years working in the Longview Police Department’s evidence room. The strangest appeared on his shelves early this year after police
http://tdn.com/news/local/police-auctions-feature-the-weird-and-the-mundane/article_b03d322d-d6dd-5957-8340-e1b025651a00.html
Tweet
How do you feel about this post?
Happy (0)
Love (0)
Surprised (0)
Sad (0)
Angry (0)
Tags:
altered evidence assault  kits Chain of Custody Big Three: West Coast
Thousands of sexual assault evidence kits across M...
3 detectives accused of tampering with evidence af...