By Minnesota law, sexual assault survivors don't have to decide whether they want to go to police when they arrive at a hospital to be examined.The reasoning: It's hard enough to decide, in those traumatic hours, to even come in for an exam. 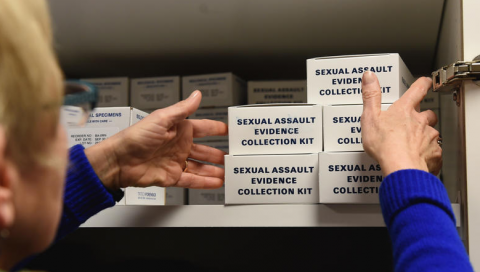 By Minnesota law, sexual assault survivors don't have to decide whether they want to go to police when they arrive at a hospital to be examined. The reasoning: It's hard enough to decide, in those traumatic hours, to even come in for an exam.

But then, what do you do with that kit? It's not just the tiny box of Q-tips, swabs and hair samples — it's bags of clothing and bedding. Hospitals aren't accustomed to holding evidence. But since it's technically not evidence yet, many metro area police departments — including those in Ramsey County — won't take them until there's a case.

So Johnson watches those orphan kits, waiting for the people who gave them to call her back and tell her what to do.

After 90 days — the official policy — she calls them. Or tries to.

"Oftentimes, I will try a dozen times to reach them," she said. But she can't leave a message. It's not safe, not secure.

She's loathe to toss a kit without permission. "I will give them more time. ... I'm just of the opinion I'd rather be safe."

Discussion over what to do with rape evidence kits likely will get some play this year at the Legislature, after a Bureau of Criminal Apprehension report found in late 2015 that 3,500 kits are sitting on police and sheriff's department shelves, untested.

That's not counting those sitting in hospitals like Regions, or in the 25 departments that didn't respond to the bureau's survey.

But not many people understand that number, what it means. A chunk of those kits are "anonymous," belonging to people who don't want police involved, at least not yet. There are cases where complainants drifted from police contact. An even bigger portion are closed — found to be either unfounded or not prosecutable.

In fact, only a tiny portion — 92 — were actually under active investigation.

Still, state law requires the kits be kept at least until cases are closed — and with some dating to the early 1990s, state officials have to figure out what to do with them. Test them? Store them? And if so, where?

"I want to see the kits tested if the victim intended them to be tested," said Caroline Palmer, public and legal affairs director for the Minnesota Coalition Against Sexual Assault.

It's a desire for which there's hardly unanimity.

Every couple of months, seven people — several cops, a prosecutor, a nurse, a survivor advocate — gather around a table at the Duluth police department and pore over hundreds of files.

They have an unenviable job: trying to pick which 10 — just 10 — of the 550 or so sexual assault kits they store downstairs that they will forward to the state Bureau of Criminal Apprehension for testing. The first run-through took two months.

"We are trying to find the ones that we think have the most investigative value. ... It really was just a matter of reading case files," said Mary Faulkner, the advocate.

There's a reason Duluth put together the committee and got the first federal grant of its kind in the state to pay for it.

When all the accounting of Minnesota's sexual assault kits was done, the city that sits as gateway to the North Shore earned a notorious distinction. It had — and still has — far more kits than any other municipality in the state.

Police officials there say they earned that distinction by actually doing the right thing. They keep all biological evidence — even on closed cases — for years, as state statutes require them to.

Also, Duluth's police department accepts kits from hospitals: A full quarter of its inventory is from people who haven't even agreed to talk to them yet.

Duluth police chief Mike Tusken won't point fingers at specific departments, but "we have heard that other agencies, yes, in fact did get rid of their kits.

"We have always been and always are very good at evidence retention. Until several years ago, we were maybe even keeping things we shouldn't. Things with no evidentiary value anymore," Tusken said. "Now we've become kind of a poster child for having more than others."

The statute of limitations for the most serious form of criminal sexual conduct is nine years after a crime is committed, or three after it's reported — whichever is longer.

But for criminal-sexual conduct cases with evidence capable of being tested for DNA, there is no statute of limitations. Meaning such evidence should, by state law, be kept indefinitely.

With the spotlight on them, Duluth got the grant, and over the course of several months reviewed its hundreds of cases — some dating back to 1993.

"You don't want to be the worst in something. But sometimes if you are and you own it, you get the resources you need and can turn it into a positive," said Faulkner, who works for a Duluth-based nonprofit, the Program for Aide of Victims of Sexual Assault.

As part of the review team, Faulkner's desk sits in the Duluth department, alongside sexual-assault investigators.

How does she help choose just 10?

Was the suspect a stranger? Top of the pile.

Did they deny contact with the victim? Top of the pile — a test will help prove it.

Is there a possibility they might be a serial offender? Top of the pile.

How about the victim? A minor? A Native American — historically underserved? Did they immediately tell family or a friend about the assault — and are they still in contact, saying they want their kit tested? Top of the pile.

On the other had, were they labeled "uncooperative," and that's why the case was closed? Top of the pile.

"We're really trying to find out why that was, in these cases," Faulkner says.

Duluth's inventory reflects both the complex problem and common misconception about the kits.

Yes, they could reopen, but the huge majority of them are closed. Some involved confessions — so why test the evidence? Many were deemed not prosecutable. In many more, the alleged victim decided not to pursue charges.

"We would like to know why the cases were closed," said Palmer, of the Coalition Against Sexual Assault.

Palmer points to a study recently done of the Detroit police department, as it tried to tackle 11,219 untested kits discovered there.

"Law enforcement personnel expressed negative, victim-blaming beliefs. ... Case after case was labeled 'a deal gone bad' or otherwise dismissed as 'not really a rape,' and these attitudes directly affected law enforcement personnel's decisions regarding whether to submit a rape kit for forensic testing," the report said, while also noting "chronic understaffing and resource depletion."

In the end, Michigan passed legislation requiring that all sex-assault kits be tested if the reported victim gives consent, taking the decision out of the hands of police departments entirely.

While the study, conducted largely by professors at Michigan State University, was federally funded, the U.S. Department of Justice has yet to publish it.

But local law enforcement officials warn against drawing similar conclusions about Minnesota, which presumably has no such issues with staffing.

"It really would be inappropriate to apply the statistical expectations that occurred in Detroit. To compare the two is really apples and oranges," said Catherine Knutson, a deputy superintendent with the state's Bureau of Criminal Apprehension who oversees the forensic science service.

Palmer says a "deep dive" into the old, closed files doesn't have to be confrontational — it would be done by the departments themselves, with extra federal funding.

"It doesn't necessarily mean everything was handled badly or wrong; it just means it might need a second look," Palmer said.

Whether to test each kit

But regardless of whether cases are given another look, the question of whether to test every kit remains at the forefront of the debate.

The Detroit report also noted that its kits, when entered into the federal DNA database, received "hits" for other crimes whether or not victims knew their attackers — a strike against a presumption that only stranger rapes would yield results for other crimes.

Still, the lawmaker working most closely with the Coalition Against Sexual Assault on a possible bill disagrees with the idea of testing every kit.

Linda Walther, an experienced RN sexual assault nurse examiner at Regions Hospital, bristles at leaving it up to police to decide whether to have kits tested.

"We all operate about these myths and biases about everybody, and rape is no different. ... Not all investigators view sexual assault the same way."

Some agencies already are moving toward that model, independent of a state mandate. Duluth is aiming to send every kit they investigate within 30 days.

The Anoka County sheriff's department, which had the second-highest tally in the state, at 495, is also sending kits for every case they believe meets a criminal standard. That's regardless of whether they get a confession, or other circumstances that would have made them decide not to in the past.

The Bureau of Criminal Apprehension, for its part, reiterates the concerns of O'Neill and others — including the Coalition Against Sexual Assault — that flooding the system will hurt all their cases.

It's not just theory: It's already happened. Ever since the BCA came out with its report, those same departments mentioned in the report started sending in kits. En masse.

Turnaround times on rape kits — always given high priority — have since shot from 33 days in 2015 to 60 days, BCA officials said.

Those include active cases. Remember those 10 kits Duluth sends in every so often?

If they suddenly got thousands more, all at once?

"We know, due to resources, that's not realistic," said Palmer, of the Coalition Against Sexual Assault.

It isn't just rape kits: Over the past five years, cases requiring DNA analysis have increased 57 percent, as the technology becomes more widely used. Nonviolent property crimes have a four- to six-month turnaround.

The BCA just received funding for eight more staff, with which it hopes to decrease turnaround time for all DNA cases to 30 days.

But that estimate wouldn't factor in the 3,500 or so kits sitting on shelves.

For them, the BCA's Knutson said, "That conversation is ongoing."