Attorney General Pam Bondi says the state is ahead of pace in reaching its goal of processing all 86 hundred backlogged kits by June, 2019. 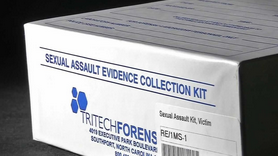 "Our goal is to help victims, solve cases and get closure, as well as lock up many of these monsters who are out there. They're serial rapists, serial criminals and they travel. They go throughout the country," said Attorney General Pam Bondi.

These recently processed kits have resulted in nearly 1,400 hits in a federal DNA database.

"Just think of the cases that can potentially be solved, and not only help victims here in Florida but victims throughout the country," remarked Bondi.

Prior to a 2016 law, Florida had not required rape kits to be tested. Law enforcement agencies are now required to submit evidence within 30 days of the beginning of their investigations, and the sexual assault kits must be processed by the lab within 120 days of receipt.

Attorney General Pam Bondi says the state is ahead of pace in reaching its goal of processing all 86 hundred backlogged kits by June, 2019.

"Now that this is in a database, I think it is going to be amazing with the help that we are going to be able to do to get these bad guys off the street, lock them up, and help victims," added Bondi.