He was wrongly convicted and spent 31 years in prison. Now he's asking the state for $1 million (DNA)

Lawrence McKinney, 61, was convicted in Memphis in 1978 and spent more than 31 years in prison before new DNA evidence led the court to overturn the conviction in 2009 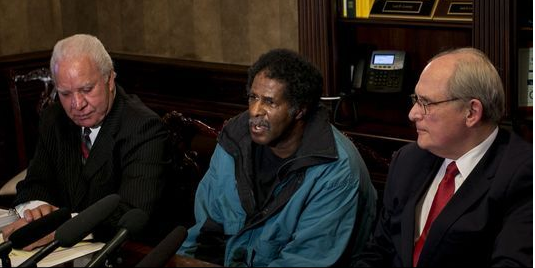 Days after Gov. Bill Haslam exonerated a Wilson County man who was wrongfully convicted of rape and burglary, his lawyers have asked the state for $1 million in damages.

Lawrence McKinney, 61, was convicted in Memphis in 1978 and spent more than 31 years in prison before new DNA evidence led the court to overturn the conviction in 2009. His charges were expunged and he was released from prison.

Despite the legal vindication, McKinney could not ask the Tennessee Board of Claims for compensation without executive exoneration. It is typical for exonerated people to apply for and receive money if they served time on an overturned conviction.

Haslam's move cleared the way for compensation requestAfter Haslam granted exoneration on Dec. 20, McKinney's attorneys David Raybin and Jack Lowery announced their intention to ask for $1 million, the maximum possible compensation allowed under a state law passed in 2004. They filed their request with the Board of Claims Thursday morning.

In an interview, Raybin described the money as recognition of "all the things that you lose" if you are forced to spend time behind bars for a crime you didn't commit, from income to family memories.

"A person is deprived of their life and freedom," Raybin said. "In my view Mr McKinney is entitled to far more than $1 million based on what's happened to him."

In the request for compensation, Raybin and Lowery point out that other exonerated Tennesseans have received between $37,000 and $71,000 per year of wrongful imprisonment. Using a similar scale would easily put McKinney's compensation at the legal maximum of $1 million.

McKinney's pastor has said the money could go toward a home or mission trips for McKinney and his wife.

McKinney has pushed for exoneration for several years

Haslam's decision was a dramatic twist in an eight-year effort to secure exoneration and a financial settlement.

The Tennessee Board of Parole recommended against exoneration shortly after he was released, and then-Gov. Phil Bredesen did not act on the application. The parole board voted against recommending exoneration a second time in 2016, but Haslam granted the request anyway, saying he would honor the criminal court's decision to overturn the conviction.

"I absolutely applaud the governor, but it was what, a six or seven year struggle?" Raybin said. "The process is so slow and cumbersome."

Raybin said that, moving forward, he'd like to see state lawmakers tweak the law to streamline the process to receive exoneration. While he said the governor should always be allowed to intervene, he wanted to see more people automatically receive exoneration when their convictions are overturned.

Raybin also said the state's $1 million cap for compensation should shift up to reflect cost-of-living increases.

Lawmaker Mark Pody, who recently won a special state Senate election, has drafted a bill that would enable someone to be exonerated based on a judge's ruling if they are cleared through DNA evidence after 25 years or more in prison. The bill stalled in 2017 but could be revived.