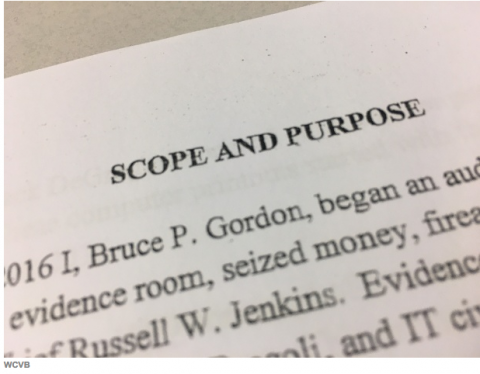 BRAINTREE, Mass. —5 Investigates has obtained a copy of an audit of the Braintree Police evidence room, and it shows missing evidence connected to criminal cases dating back to 1999.

5 Investigates first reported that the Norfolk County district attorney's office has been reviewing cases from 2013 to the present.

During the three years the district attorney is focusing on, the audit found more than 1,000 pieces of drug evidence, more than $70,000 in seized cash and eight firearms are unaccounted for.

As 5 Investigates first reported, two guns missing from the evidence room were found at the Braintree home of Officer Susan Zopatti, who was in charge of the evidence room and the only person who had access to the room during the years in question.

One of those guns belonged to Michael Flemmi, a former Boston police officer who served time in federal prison for hiding guns for his brother, gangster Stephen Flemmi, and mob boss James "Whitey" Bulger.

Zopatti took her own life in May, days after being interviewed as part of the review.

5 Investigates also learned heat-sealed evidence bags were torn open or cut, some missing narcotics evidence was replaced with other drugs, and many sexual assault kits were being stored in a trailer outside.

So far, six drug cases have been dismissed by the Norfolk County District Attorney's Office.

Criminal charges against Roberto Castillo were dropped and he walked out of court a free man on Monday. Castillo and Eileen Santos, whose charges were also dropped, were accused of dealing heroin, morphine and cocaine last year. The two suspects were arrested at a Braintree motel.

"There was an inconsistency in regard to a portion of the evidence," Norfolk County Assistant District Attorney Deb Curley told the judge. "Where there's any indication that evidence is compromised or mishandled, the commonwealth will not proceed to trial."

Mayor Joe Sullivan said last week that the department has been reviewing the audit and has found some of the unaccounted-for evidence. The town is expected to release the audit and the results of its own review this week.

The audit was conducted by Bruce Gordon of Narcotics Audit Solutions.

5 Investigates has obtained a copy of an audit of the Braintree Police evidence room, and it shows missing evidence connected to criminal cases dating back to 1999.
http://www.wcvb.com/news/5-investigates-obtains-police-evidence-room-audit-thousands-of-dollars-unaccounted-for/41662504
Tweet
How do you feel about this post?
Happy (0)
Love (0)
Surprised (0)
Sad (0)
Angry (0)
Tags:
property room evidence room East Coast
Drug charges dropped amid Braintree police evidenc...
Arrests Made In Cold Case Killings Of 2 Northern C...