The massive fire broke out early Thursday, officials say. "Thank God, no one was hurt. It was a big fire." 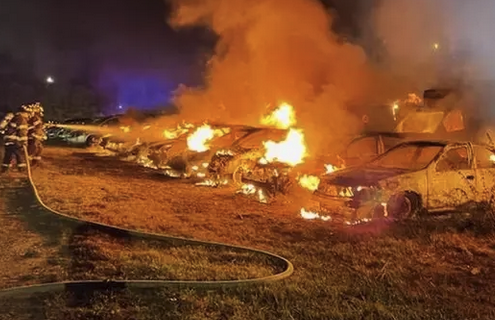 According to Westhampton Beach Fire Department Chief Mauro DiBenedetto, the fire broke out at 4:30 a.m. A worker called the fire in, he said.

The Westhampton Beach Fire Department received assistance from the Quogue and Eastport fire departments, he said.

"Those guys did a great job; it was a quick knockdown," DiBenedetto said. Some of the cars were electric, which are difficult to douse because lithium burns for a long time and needs a "copious amount of water," he said.

Find out what's happening in Westhampton-Hampton Bays with free, real-time updates from Patch.

Firefighters were back at the firehouse by 6:30 a.m., DiBenedetto said.

An investigation is ongoing and the arson squad was onhand, he added.