The vault, in the Circuit Court Clerk's office on the first floor, housed evidence in civil and criminal cases, including handguns and long guns identified as murder weapons 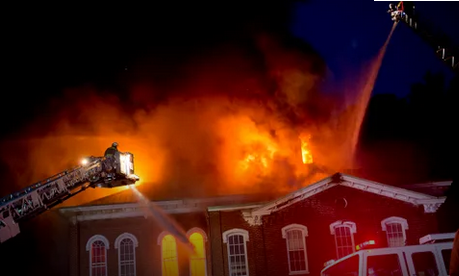 LOUDON — Gripping a flashlight, Loudon County Mayor Rollen "Buddy" Bradshaw ventured into the remnants of the courthouse, stepping on fallen pieces of ceiling to avoid wading into water pooled on the floor of the historic building.

Bradshaw, Loudon County Sheriff Tim Guider and District Attorney General Russell Johnson were among those who entered the Loudon County Courthouse on Thursday, two days after a fire broke out in the upper levels and caused massive damage to the nearly 150-year-old building. They brought deputies to help haul off documents needed to hold court Monday — and firefighters ready to react, should anything happen.

"It was a little bit of a leap of faith," Bradshaw said. "Knowing that it's a very limited space where we were going to, it looked, for the most part, stable."

Officials previously said no one would be allowed into the building until a structural engineer deemed it safe. No time for that, Johnson said.

"We needed it for court, and then we needed to get to the evidence vault to make sure it was secure," Johnson said. "Because cases that are under appeal or in post-conviction, they're going to file motions saying, 'Hey, you've lost this evidence, or this evidence has been destroyed,' and things of that nature. We've got to be able to say, 'We immediately took care of this situation. We took action to protect it the best we could.'"

The vault, in the Circuit Court Clerk's office on the first floor, housed evidence in civil and criminal cases, including handguns and long guns identified as murder weapons, Johnson said. The evidence, which appeared intact, was cataloged, loaded into a trailer and moved to the old Loudon City Hall building, where some court services are expected to resume next week. (The courthouse remains closed to the public, and the county is planning to erect a fence around it soon.)

The group who entered the courthouse Thursday primarily stayed on the first floor, which suffered smoke and water damage but was untouched by the flames. Johnson, however, went up to the second floor to retrieve some personal items from an office there. He took a cellphone video showing the extent of the damage to a courtroom — where all jury trials were held — that was destroyed when the roof collapsed during the blaze.

Investigative efforts have been stymied due to safety concerns, but photographs and witness statements suggest the fire started in the bell tower, said Loudon City Fire Chief Mike Brubaker. Flames eventually consumed the tower. The law library on the second floor was lost. Water from fire hoses filled the basement, which houses records dating back to the early 1900s.

"We feel pretty secure that there's enough potential evidence to point to electrical as a cause," Brubaker said. "We just don't have definitive proof of that. For that reason, we can't rule electrical because if we want to change our mind, we cannot."

he cause of the fire has been deemed undetermined, though that may change when the insurance company's investigator arrives, Brubaker said. A structural engineer is expected to show up Monday to examine the building — the first step in determining whether officials will be able to rebuild the courthouse or forced to destroy it and start over.

For now, though, the focus is on resuming court and county services.

Within 24 hours of the fire, officials had come up with a plan to hold court in three different buildings starting next week. Firefighters were able to save the county's servers. The status of some paper records — such as for property cases and divorces — is unclear, but those documents are backed up electronically anyway, Johnson said. Deputies also retrieved all of the files for active criminal court cases on Thursday, he added.

"Everybody thinks, 'Hey my criminal record's no longer there,'" Johnson said. "They're out of luck. That stuff's on (Tennessee Bureau of Investigation) files. There's redundancy on some of that. People are going to say, 'Hey you can't do this with my criminal charge, you can't do that.' I'm sorry. It's all still there, on a computer somewhere, maybe at the TBI, maybe somewhere else."

The mayor, the sheriff and the district attorney general were among those who entered the historic courthouse for the first time since a fire broke out.
https://www.knoxnews.com/story/news/local/2019/04/25/officials-retrieve-evidence-documents-records-historic-loudon-county-courthouse-after-fire/3579043002/
Tweet
How do you feel about this post?
Happy (0)
Love (0)
Surprised (0)
Sad (0)
Angry (0)
Tags:
evidence room fire lost evidence
Arrest Made in 1972 Cold Case Murder of Woman Shot...
New law changes statute of limitations for sex cri...
Comment for this post has been locked by admin.