After scandal, ‘nothing to hide’ in new Braintree police evidence room

Braintree police are about to put a one-of-a-kind, $500,000 evidence room into service, built in response to a scandal that shook the department. 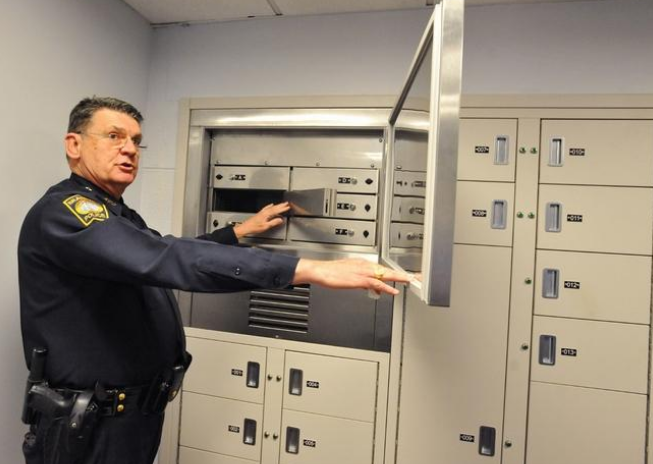 BRAINTREE − There's a whole lot of glass inside the Braintree Police Department's new evidence room, but not a single window to the outside.

From where the evidence officers sit, they can look through glass walls at the lockers where officers will drop off the evidence, the main storage area, the room where firearms and other valuables will be stored, and another where drugs will be kept. All are enclosed by glass walls with doors that require a key fob, a pin code and a thumb print to unlock.

Cameras inside the room and in the hallways approaching it can see everything.

These are a few of the features of a new, one-of-a-kind, $500,000 evidence room built in what was originally the police station's pistol range. Starting next month, the department will move the more than 20,000 pieces of evidence it maintains to the new room, which was built in response to a missing-evidence scandal that shook the department and resulted in the resignation of the former chief in 2016.

There are no blind areas," Police Chief Paul Shastany said. "The cameras are able to see if a coin on the floor is heads or tails."

The cameras and the storage racks were easy to see during a tour of the new evidence room Wednesday. Harder to spot were evidence tags that each contain a chip similar to the ones in credit cards. Sensors scan the room constantly, and if a piece of evidence moves without permission, the system will send text alerts up the department's chain of command. If a piece of evidence gets misplaced, it can be tracked down with a hand-held device called a "geiger counter."

"You are not seeing this level of security in any other 85-officer department," Wallace said. "We don't want evidence to be a question."

Shastany called completion of the new room an exciting moment.

"This is no off-the-shelf product we installed. This evidence room is like no other in the country. Once the industry sees this, it will reset expectations. This exceeds any standard that exists right now. The purpose of this is to restore faith in the production of evidence," he said.

After the 2016 suicide of a former Braintree police evidence officer, an audit found money, drugs and cash had been misplaced or stolen from the department's evidence room. The scandal led to the dismissal of close to 200 court cases and reduced charges in others.

Investigators from the state Attorney General's Office found that the evidence officer, Susan Zopatti, had taken drugs, cash and firearms from the evidence room. They could not say conclusively whether evidence had been taken by anyone else and did not recommend charges against anyone in the department.

An outside consultant retained by the town criticized the department's brass for lax supervision of the evidence room, resulting in the resignation of former Police Chief Russell Jenkins, whom Shastany replaced. Two other top departmental officials resigned in the face of disciplinary proceedings tied to the report's findings.

The scandal touched all of the department's officers, Wallace said.

"It was a terrible time here," he said.

Wallace, who works on the department's technology, helped design the evidence room with Shastany. He consulted with airline baggage system operators, the military and retailers on how they handle their inventories. Shastany recalled seeing at a trade show the patented PADtrax system developed by Louisiana-based C&S Associates, whose tracking equipment and software is used in the evidence room.

The chief said they called the company on a Thursday and their representatives were at the station the next Monday.

With the system, the department can perform real-time inventories of the storage areas. Shastany said it took the department's two evidence officers, Ron Solimini and Ken Bregoli, two years to complete an inventory of the items now in storage.

Shastany is planning an open house for residents before the room is put into use next month. The date hasn't been announced.