After the Verdict: Disposing of Evidence at the CCSO

He stands calmly, evidently accustomed to the smell, between rows of meticulously organized evidence bags. 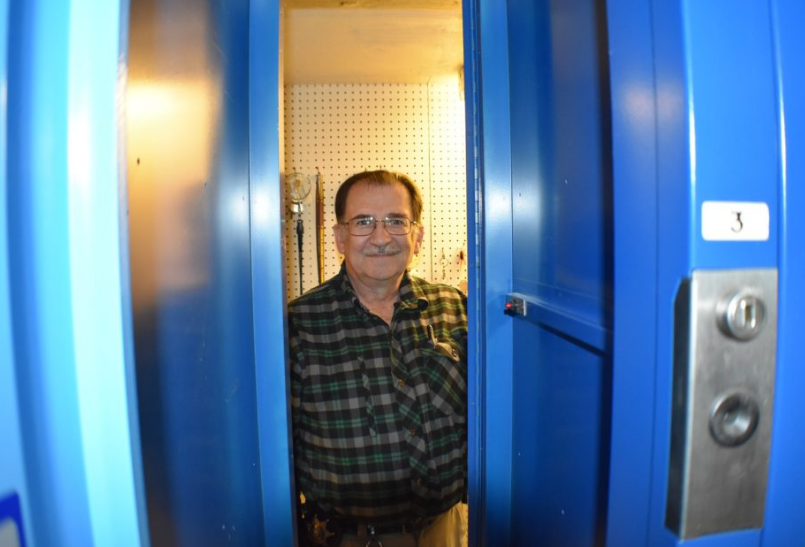 The smell hits you first as Harry Einfalt, Campbell County Sheriff's Office investigator, unlocks and opens the door to the evidence vault.

"Don't touch anything," Einfalt warns, leading the way into the vault.

It's pungent; the air is warm and heavy with a sickening concoction of odors created by mixtures of marijuana and heroin, cocaine and methamphetamine, and psilocybin mushrooms.

He stands calmly, evidently accustomed to the smell, between rows of meticulously organized evidence bags.

Everything has a place; it must if the evidence is to be stored in accordance with the strict, uncompromising procedure of the CCSO.

The procedure starts with the deputy who confiscates the evidence off the street. The first step, of course, is completing paperwork to describe precisely what the evidence is and the day and time that it is being brought in.

Then, they package the evidence, seal it in an evidence bag, and inscribe their initials upon it. But the deputy does not place the evidence in the vault itself; only Einfalt, Investigator Mary Pedova, and Sgt. Janaia Hyland have keys that grant them access to the vault.

The evidence must be placed into a blue locker, which immediately locks once the door is closed. At which point, the deputy's job is complete, and the evidence technicians take over.

"We're the only ones that handle the evidence from that point on," Einfalt explained.

But once any drug evidence, including paraphernalia, or firearms enter the vault, it is a slow, arduous process for the sheriff's office to rid themselves of it.

"[Drugs] come in faster than anything else, and then it takes forever to get rid of because we have to go through the courts, go through the attorney general, and make sure the cases are adjudicated," Einfalt explained.

He admits that it's a time consuming process, but it is necessary to ensure only evidence that has served its purpose in court and is not needed anymore is destroyed.

That's when things start to get a little interesting.

"When it's paraphernalia, glass or metal, we smash it. We literally destroy it," Einfalt said. "When we say it's destroyed, it's destroyed."

Plants, powders, and pills are disposed of using a metal bin, specifically designed to burn with such intensity that literally nothing is left when all is said and done. All burning is carried out at an undisclosed location at an undisclosed time.

"We don't need anybody around the evidence when we're destroying it," Einfalt explained.

Once the barrel is finished burning, what little ash exists is buried underground.

Syringes, once any narcotics are removed from within, are placed in a sharps container, which is then disposed of at Campbell County Health.

Firearms are a little trickier. Further documentation, a record of attempts to locate and contact the owner, is required.

If the owner is not located, or the owner does not want the firearm back and wishes for the CCSO to destroy it, then another court order is needed.

Once that is obtained, the firearms are turned over to bomb technicians, who will use it for training and blow them up, Einfalt said.

Interestingly, Einfalt said that evidence technicians do not use any respirators or other protection aside from gloves when disposing of narcotics.

"We stay out of the smoke as best we can," Einfalt explained. The way he sees it, respirators are not needed because the burning takes place in the open, fresh air.

"If we have something that we are concerned about, then we could get an SCBA (self-contained breathing apparatus), but we haven't needed one yet.

Back inside the evidence warehouse, however, a lone table stands next to a metal cabinet. It's the station where deputies can package questionable drugs that they suspect could be particularly harmful, like fentanyl.

In the cabinet, Tyvek suits, latex gloves, and doses of Narcan standby, within easy reach of the table.

Einfalt said that when a deputy suspects that a substance could be fentanyl, or the more potent and dangerous derivative carfentanyl, he or she never handles it alone. A second deputy must stand by at all times.

"In case there is an exposure and [the deputy] goes down, then the other deputy can administer Narcan," Einfalt explained.

Have we not all wondered, at one point or another, what happens to evidence after the courts verdict is announced?

From the moment it enters the vault at the CCSO, to the moment it leaves, every stage in the life of evidence is meticulously documented, down to the tiniest detail.

The process is long, tiresome, and it is thorough.

After the Verdict: Disposing of Evidence at the CCSO – County 17