After Years Collecting Dust, Missouri's Untested Rape Kits Are Getting Sorted Out

Missouri has more than 10,000 untested rape kits sitting on shelves in police departments and hospital — some have been there for decades — 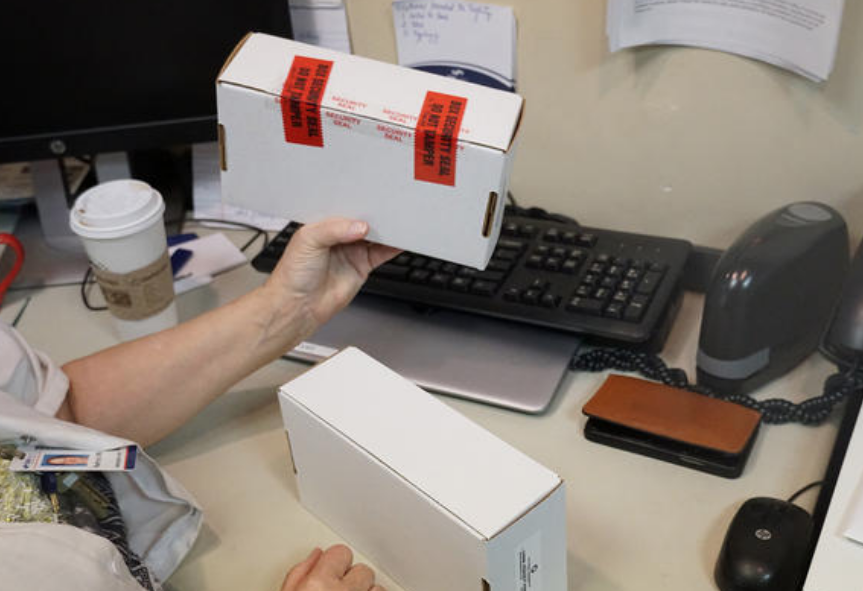 Missouri has more than 10,000 untested rape kits sitting on shelves in police departments and hospital — some have been there for decades — but the state is finally set to have a full inventory of those kits by the end of the month.

Once the inventory is complete, Attorney General Eric Schmitt's office can move forward with creating an electronic database to not only keep track of the untested kits, but to help prosecute rapists and provide justice for victims.

This is all a part of a $2.8 million grant former Attorney General Josh Hawley's office received from the federal Bureau of Justice Assistance. Additional money will be needed when it comes time to actually test kits.

Schmitt said that probably won't happen for months, and prosecution likely won't occur for years. Schmitt said his team is moving quickly, while taking steps to make sure this type of backlog never happens again.

"It is inexcusable," he said, "that a potential crime had been committed, that a victim came forward, had the courage to submit to that test, and it is literally sitting on a shelf somewhere. It's totally unacceptable."

Taylor Hirth's rapists were prosecuted with the help of her kit, which had been tested. In 2016, Hirth (who agreed to be identified in this story) was startled awake in the middle of the night by a stranger in her bedroom.

"My daughter was asleep in my bed between me and where he was standing," she recalled. "He told me to get on my stomach."

When the 30-year-old Hirth screamed, the man crawled over her 2-year-old to get on top of Hirth. He told her if she continued to fight, he'd hurt them both.

"Then another individual showed up in the doorway, and both of them took turns raping me," she said.

She said the men were in her apartment in Independence for about two and a half hours. During that time, she tried to keep count of how many times she was raped, but she lost track when she reached out for her daughter and noticed she was sitting up in bed.

"All I knew was my daughter was awake and she was sitting there watching me being raped with pants over my face," she said. "I held her hand, and I told her it's going to be OK."

Hirth went to a hospital for a sexual assault exam. Kathy Howard, a sexual assault nurse examiner who has done these exams for decades, said they often retraumatize victims, especially the interview portion.

"It brings back memories," said Howard. "It's difficult for them to talk about; sometimes it's embarrassing."

Typically a police officer is in the room to take the victim's full statement so they don't have to give it multiple times. But, according to Howard, the questions are incredibly invasive and don't solely focus on their assault.

Howard said the physical exam can be just as difficult because the nurse needs to scan and photograph any areas of the body where DNA may be. The nurse will then swab those areas to collect evidence.

For thousands of Missourians, their kits are just sitting on a shelf somewhere. Sometimes, victims don't want it tested, because they don't want to have to file a police report. If this is the case, hospitals are required by state law to keep the kits sealed in a room where patients cannot access them. Theoretically those kits are safe, but Howard said there can be problems.

"We're not evidence storage, that's not our design," Howard said. "One of the hospitals I worked with in the past had a leak and some of those kits got moldy, and mold kills DNA. So, they lost the kits."

Kits may also go untested because they won't provide evidence needed for police to prosecute. But there are other reasons, too.

"Law enforcement might not believe this person and that's why they didn't submit the kit," said Jennifer Carter Dochler with the Missouri Coalition Against Domestic and Sexual Violence.

The coalition is a nonprofit organization that offers statewide education and resources to victims of sexual and domestic violence. An advocate from the organization is often in the exam room with victims of rape and they'll offer support and guidance to victims as they move through the criminal justice process.

Dochler said simply taking an inventory of the untested kits across the state is an important step.

"For years, we have been asked exactly how many untested kits are there, and we have not known," she said. "There is not one centralized place or mechanism to have that information to know how many kits we're talking about."

Once the inventory phase of the project is complete, Schmitt said the state will then move forward with the electronic database.

"We don't know exactly what that looks like yet," he said. "It will allow victims and law enforcement and medical providers to be able to track where that kit is in the process … if it's been tested or not, or when that's going to happen."

Some of the kits have been sitting untested for so long that the evidence is outside of the statute of limitations. This means that, for some of these victims, they don't even have the opportunity for justice.

For Hirth, she said her kit going untested was one of her biggest fears. She worked hard to make sure that didn't happen.

"I called my state senator," she said. "I had a county legislator that I was good friends with calling different people trying to figure out when it was going to get tested."

Due to Hirth's persistence and the violence of her attack, her kit was expedited and tested within a couple months. But, after six months, Hirth said law enforcement told her they did not have any leads and were planning to close her case. Just as Hirth was accepting her rapists may go free, she got a phone call.

"I got a call in the middle of the night saying, 'I don't know if you heard about the kidnapping in the next state over where a sheriff's deputy was kidnapped, but we caught the guys," she said. "'They're in custody. Their DNA matches the DNA in your rape kit.'"

Because her DNA kit didn't sit on a shelf in an evidence room, Hirth put her rapists behind bars.

Send questions and comments about this story to

After Years Collecting Dust, Missouri's Untested Rape Kits Are Getting Sorted Out | KCUR

Missouri has more than 10,000 untested rape kits sitting on shelves in police departments and hospital — some have been there for decades — but the state
https://www.kcur.org/post/after-years-collecting-dust-missouris-untested-rape-kits-are-getting-sorted-out#stream/0
Tweet
How do you feel about this post?
Happy (0)
Love (0)
Surprised (0)
Sad (0)
Angry (0)
Tags:
rape kit backlog
This groundbreaking DNA testing method solved a 19...
Arrest Made In Anaheim Cold Case Murder
Comment for this post has been locked by admin.