Years ago, an audit revealed more than 5,400 rape kits statewide were untested 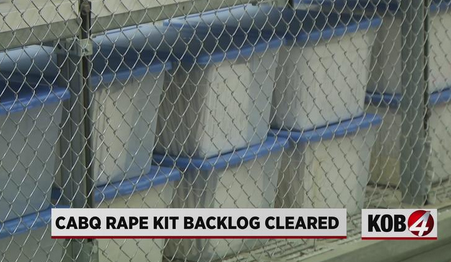 Keller said the backlog was actually cleared in March 2020.

"I remember it was during COVID when we sent the last one out," Keller said. "So actually it was in the heart of COVID and I was with one of our key staffers taping up the last box as it went out during COVID and no one really noticed that, and that's OK other than the fact that now we want to make sure that this message gets out."

Years ago, an audit revealed more than 5,400 rape kits statewide were untested. Albuquerque had 75% of those untested kits.

Now that they have been tested, prosecutors are reviewing the cases.

Advocates say they're working to get justice for victims.

"Testing rape kits sends a fundamental and crucial message to survivors of sexual violence: you matter. What happened to you matters. Your case matters," said Jodie Jaramillo of the Rape Crisis Center of Central New Mexico.

"There are many factors and reason that led to the backlog-- from insufficient funding for the lab and the employees not having the appropriate technology and tracking systems and a history of only testing kits are requested by the district attorney's office," Medina said. "We now have the funding we need, more staffing and processes in place to stay ahead of getting another backlog."