Arrest Made In 1987 Cold Case Murder Of Roxbury Woman

James Paige, 50, of Manchester, New Hampshire was arrested  and
charged with first-degree murder in the 1987 killing of Roxbury resident
Dora Jean Brimage. 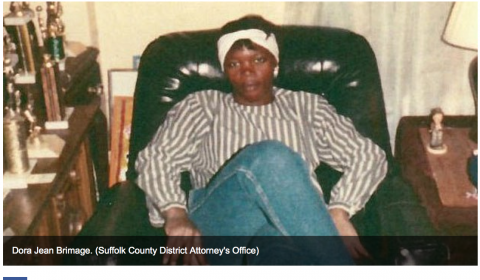 BOSTON (CBS) — A New Hampshire man was arrested in the murder of a Roxbury woman nearly 30 years ago, the Suffolk County District Attorney's office announced at a press conference Tuesday afternoon.

James Paige, 50, of Manchester, New Hampshire was arrested Monday and charged with first-degree murder in the 1987 killing of Roxbury resident Dora Jean Brimage.

Officials including Suffolk County DA Dan Conley and Commissioner Bill Evans made the announcement of Paige's arrest at a press conference Tuesday afternoon.

Police said Brimage was last seen leaving a party near Prentiss Street in Roxbury. Police believe she accepted a ride from Paige, and that Paige took her to a vacant building under renovation on Warren Street. Her body was found there the next day, September 7, 1987, by workers. She had been beaten, sexually assaulted, and strangled to death.

The Suffolk County DA's office said in a release Tuesday afternoon that the case was solved by testing biological evidence secured from Brimage's body by detectives at the scene where she was found in 1987. Conley said the technology used to identify Paige was not available in the 1980s.

"The first generation of investigators could not identify her killer at the time, but their careful, methodical work was a major contribution to the case," Conley said at the press conference Tuesday. "They retraced Dora's steps, interviewed witnesses at the party, and perhaps most importantly, secured biological evidence from her body."

Conley praised the work of the Cold Case Squad in re-interviewing witnesses, which he said was instrumental in his office's being able to take their case to court, since DNA evidence alone cannot prove murder.

"Conducting a meaningful interview with a witness decades after the fact is no easy task, and that's assuming they're still alive and you can find them," Conley said. "Memories can fade, corroborating evidence can deteriorate, and the passage of so much time rarely benefits the prosecution team."

Conley mentioned the recent charges brought in the 1992 murder of Tufts University grad Lena Bruce as another case that DNA evidence helped solve, and said that, in the past seven years, suspects in 17 cold cases had been identified. He said that every one of those suspects to stand trial has been found guilty.

"That's a phenomenal success rate, and it speaks to the world-class professional partnership between Suffolk prosecutors and Boston police," said Conley. "When the evidence exists, we follow it wherever it leads–no matter how many years it might take or how many miles we must travel."

Paige is currently in custody at the Hillsborough County House of Corrections in New Hampshire, having been arrested last Friday for a parole violation. He is expected to be brought to Massachusetts to face the murder charge sometime in the next few weeks.

Under a federal grant, that DNA evidence was submitted for testing by the Boston Police Cold Case Homicide Squad. Once it was uploaded to the FBI's Combined DNA Index System in 2014, Conley said, it matched DNA evidence that had been taken from Paige as a result of a proir felony conviction.