"Store Meth from a bust" Sometime after they began communicating last year, the relationship between a Metro Police detective and a woman turned sexual.

Several times when she was in handcuffs for incidents like arrest warrants, alleged shoplifting, or being found inside a stolen vehicle, Lawrence Rinetti Jr., the detective, came around and she was freed, according to an arrest affidavit.

On another occasion, when she needed money to pay rent, Rinetti stole methamphetamine from a bust and gave it to her to sell, Metro alleges.

Rinetti, 46, was taken into custody Oct. 18 and booked on counts of misconduct of a public officer, selling, transporting or giving away a controlled substance, and destroying or concealing evidence, Las Vegas Justice Court records show.

Rinetti, who's since bailed out, denied the allegations, according to the report, which is heavily redacted and its narrative difficult to follow.

Through multiple sources, including an informant and an ongoing investigation by Metro's gang unit, the detectives who ultimately arrested Rinetti learned about his apparent relationship with the woman.

Investigators at that point began to believe that Rinetti was using his authority to assist the woman for "his own personal gain, which is maintaining a personal relationship" with her, police said.

They obtained phone records that showed 16,683 contacts between them, police said. In July, detectives began surveilling Rinetti and his movements.

During a time that month in which he was being watched by an officer in an unmarked Metro car, Rinetti followed him, tailgating him and "screaming to the point veins were bulging from the side of his head and neck," police said.

Police said Rinetti had run a plate check on the undercover officer's cruiser.

The next month, detectives installed GPS gadgets on the Metro vehicles assigned to Rinetti and began tracking his moves, according to the report. Rinetti would visit the woman often, police said.

Police later learned of missing drugs in two incidents associated with Rinetti, according to the report.

In the first, Rinetti was in charge of impounding a wooden box with small amounts of prescription drugs and methamphetamine, police said. A records check did not show the drugs were secured and it was "unknown what Rinetti Jr. did with the narcotics from this event."

In January, Rinetti was in a task force that came across 4 ounces of methamphetamine, police said.

About 1.5 ounces went missing — believed to have been taken by Rinetti, police said.

The woman told detectives in an interview that Rinetti had given her meth and heroin, police said. "She used a little bit of the methamphetamine and sold the rest so she could pay for her rent," she told police.

Rinetti will next appear in court on Nov. 18. It's unclear if he's being represented by an attorney who can comment on his behalf. 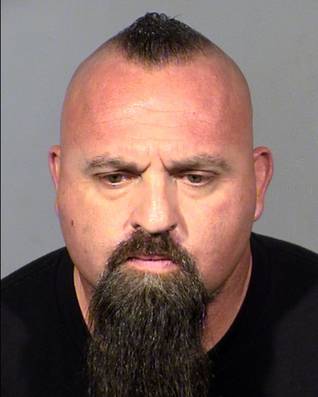 Sometime after they began communicating last year, the relationship between a Metro Police detective and a woman turned sexual. Several times when she was in handcuffs ...
https://lasvegassun.com/news/2019/oct/29/arrest-report-metro-detective-helped-lover-avoid-j/
Tweet
How do you feel about this post?
Happy (0)
Love (0)
Surprised (0)
Sad (0)
Angry (1)
Tags:
West Coast
State criminal reform law could cost NYPD close to...
U.S. grand jury indicts ex-deputy in theft of FBI'...