The additional work brings the overall evidence building project up to $1,555,000 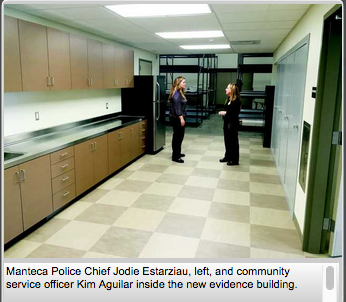 Manteca Police may have cramped headquarters but at least there should be adequate room for evidence storage.
The City Council this week approved spending $120,000 that will buy shelving for the new 2,200-square-foot evidence building as well as remodel and purchase replacement shelving for the older 800-square-foot evidence building. The space set aside for evidence storage now accounts for 16% of the police complex's 22,000 square feet. That compares to Turlock, a slightly smaller city that has 57,000 square feet.
The additional work brings the overall evidence building project up to $1,555,000.
The older evidence building will be used to hold evidence police by law must hold onto for longer time periods. Besides growth generating more crime and the need to store more evidence, sate laws have changed that require that evidence connected with some crimes be kept for longer periods than previously required creating a storage problem.
Before the new building was completed in April, the department was essentially without adequate storage space.
The shelves in the older evidence room have to be replaced because the city opted to purchase particle board shelves instead of steel shelves 25 years ago. All the new shelving is steel and will be bolted to the ground to meet earthquake safety standards.
The new evidence building allows police to have separate secure rooms for narcotics and guns – something most departments have had for years. The new evidence room has freezers and refrigerators for use when needed and an area to dry blood for proper storage. There is also a vault designed to store explosives such as illegal fireworks seized as evidence until such time they can be destroyed. Previously such items were placed in an outside cabinet at the police compound.
It also include a large outdoor covered area where homeless belongings are held for 90 days to be claimed — 60 days longer than courts have mandated necessary. The items are then destroyed if not retrieved by the owners by the deadline. The reason why the area is appreciated by police staff is due to the homeless items often being riddled with vermin that the employees then have to deal with when it migrates when stored inside.
Department members over the years have described the existing evidence building that is jammed with evidence as resembling what one might expect to see in a hoarder's house.
Manteca city leaders back in 2000 when Manteca had 49,258 residents — 27,000 less than it does today — determined that the police complex was inadequate. They originally made an effort to address it by looking at a plan to revamp the entire Civic Center but that was nixed for being too expensive.
Then in April 2006 the City Council spent $3.6 million in redevelopment agency funds to purchase the 57,000-square-foot former Qualex film processing building at 555 Industrial Park Drive for remodeling future home for the police department.
The purchase was a dud as escalating costs connected to stricter earthquake standards for critical public safety structures prompted the city to drop that project.
Since then the state pulled the plug on redevelopment agencies forcing the city to prepare to sell the Industrial Park Drive site later this year. By state law, they will split the proceeds with the state and other taxing agencies that rely on the general property tax rate that had been diverted ton fund RDA projects.
Not only has the city spent $6.2 million on new police facilities with nothing to show for it, the properties are expected to sell at auction for less than their purchase price.
In terms of permanent space for officers and support staff, Manteca is still making do with what was put in place in 1978 — some 39 years ago — when the city had 22,000 residents.