"I'm p—-ed off," McCoy said. "I am upset. You don't expect this from a police department. I wouldn't have guessed this would happen in a thousand years." 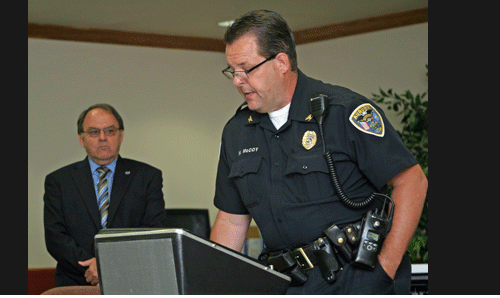 An audit of the evidence room in January revealed $2,033 in cash was missing, as well as four knives, eight .22-caliber bullets and a 12-gauge shotgun, McCoy said.

A woman came to the department Jan. 19 to reclaim $1,447 cash from a case that had been resolved. The audit was prompted when officers could not find the money, the chief said.

"We have no idea how it was taken," McCoy said of the money. "It's gone. I don't think we'll ever recover it."

The criminal case will not be reopened, McCoy said. However, an internal police department board could recommend disciplinary action against officers next week.

"I highly expect to see some disciplinary measures sent my way," he said.

McCoy took responsibility, saying it falls back on him to maintain the integrity of the department. He apologized to the community, the mayor of Auburn, the DeKalb County prosecutor, and others who would be affected by the incident. He admitted extreme disappointment in not having solved the case.

"I'm p—-ed off," McCoy said. "I am upset. You don't expect this from a police department. I wouldn't have guessed this would happen in a thousand years."

The missing cash comes from four separate drug-related cases ranging from August 2013 to November 2014, McCoy said. In such cases, officers seize as evidence any cash a suspect has at the time of an arrest. Like other evidence, it is sealed in plastic bags.

The $1,447 that was the first cash discovered to be missing had been placed in the evidence room in March 2014. That money was repaid to the owner from the police department budget, McCoy said.

McCoy said he believes the missing weapons were destroyed, but the destruction was not documented properly. The weapons were evidence from a case in 2000, he said. The department regularly destroys seized weapons and has destroyed approximately 70 weapons so far this year, he said.

Indiana State Police Detective Kevin Smith and Trooper Andrew Mills conducted a criminal investigation from Feb. 2 to April 6, McCoy said. They investigated more than 37 people, including all police employees, several civilians and several contractors who might have been near the evidence room, McCoy said.

With assistance from the Allen County Sheriff Department, the Auburn Police Department's Office of Professional Standards conducted an internal investigation from April 6 to July 27, McCoy said. Each police employee was required to submit a written statement during the investigation. The Allen County Sheriff's Department reviewed and analyzed the statements and narrowed the investigation down to five Auburn police employees. Four of those five took polygraph tests, McCoy said.

Results of the internal investigation will be turned over to the Auburn Police Disciplinary Review Board, which will meet Monday to decide if any disciplinary action is necessary. The board is made up of one police sergeant, two patrolmen and one civilian police employee, all selected by McCoy. The police department captain chairs the board and votes only in instances of a tie.

The board can recommend a full range of disciplinary action for a police employee, from no action to termination. The board will meet Monday and make a recommendation to McCoy at the end of next week, McCoy said. If the chief disciplines an employee with a suspension of five or more days, the Auburn Board of Public Works and Safety will handle the action and the employee will have the right to a hearing, McCoy said.

Several new security measures have been added to the department's evidence room, including 24-hour surveillance, McCoy said. Previously, the evidence room was secured with an electronic card-reader lock, but a keyed deadbolt lock has been added, he said. Access to the room has been limited to two officers, both of whom are experienced and trustworthy, McCoy said.

Despite the series of events, McCoy said he does not doubt the ability of his officers to guard the evidence room in the future.

"I trust every one of them," McCoy said. "I wouldn't expect that any of my officers were responsible for this. I just can't fathom that in my mind. But you put the human factor into anything and there's always a chance."