Drug paraphernalia, stolen items and firearms — some dating back to the 1980s — clogged the shelves. 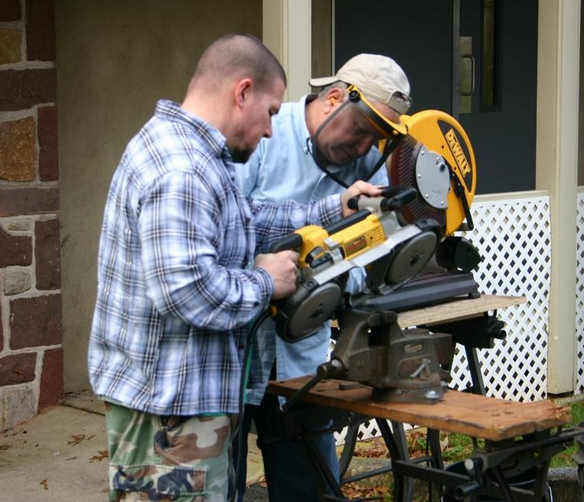 Buckingham police recently had 98 guns that were stored in the department's evidence room destroyed by a local company that salvages the parts.

Empty space inside the Buckingham Police Department's evidence storage room was getting hard to come by.

Drug paraphernalia, stolen items and firearms — some dating back to the 1980s — clogged the shelves.

So when new Chief Michael Gallagher was hired late last year, he decided it was time to clean house.

"For me, coming into a new organization and wanting an evidence room that I know exactly what's in there, we had to start from the beginning," Gallagher said Wednesday.

The effort was spearheaded by Lt. J.R. Landis, who brought in a crew from Phoenix Distributors to destroy the bulk of the guns last Friday.

The Lower Southampton-based company deals primarily with Colt firearms and equipment for law enforcement and is affiliated with the Bureau of Alcohol, Tobacco, Firearms and Explosives.

Workers used power saws to cut through the receivers — the main body — of 98 pistols, rifles and shotguns, rendering them inoperable. Only two guns remain in the evidence room.

Northampton had just more than 60 guns destroyed by Phoenix earlier this year.

Phoenix did the work at no cost in return for permission to salvage any reusable parts.

The company inventories and values those parts. It then offers police departments a financial credit they can use to purchase equipment at Phoenix or elsewhere.

Some police departments have used it to purchase maintenance equipment for their firing ranges, said company owner Ray Schneider, adding "they could use it to buy lollipops for their D.A.R.E. program if they want to."

Schneider, who worked as a cop in Pennsauken, New Jersey for 15 years , said the final tally is still in process, but he estimates Buckingham will receive a credit of about $2,500.

But before Phoenix could be brought in to "slice 'em and dice 'em," as Schneider put it, Buckingham police had some legal hoops to navigate.

The department worked with the Bucks County District Attorney's Office to acquire a court order that would allow for the destruction of a certain portion of the guns.

"Anything involved in a (completed) criminal case you can destroy without a court order," Gallagher said, "but the ones that are just turned in by someone that may have just been cleaning out their house, we had to go through some due diligence."

According to Gallagher, the department sent letters to those residents. Most did not want the guns back. If they did, Gallagher said it had to first be determined if they were legally allowed to possess firearms.

"Once we have them they are our responsibility," said Gallagher. "We don't want them to fall into the wrong hands."

Buckingham police recently had 98 guns that were stored in the department's evidence room destroyed by a local company that salvages the parts.
http://www.buckscountycouriertimes.com/news/20171109/buckingham-cops-clear-out-evidence-room-by-destroying-old-firearms