Two years ago DNA evidence gathered decades earlier at two of the crime scenes resulted in two murder charges against Rodney Lynn Halbower, who had already been in prison for most of his adult life, most recently on an attempted murder charge in Oregon. 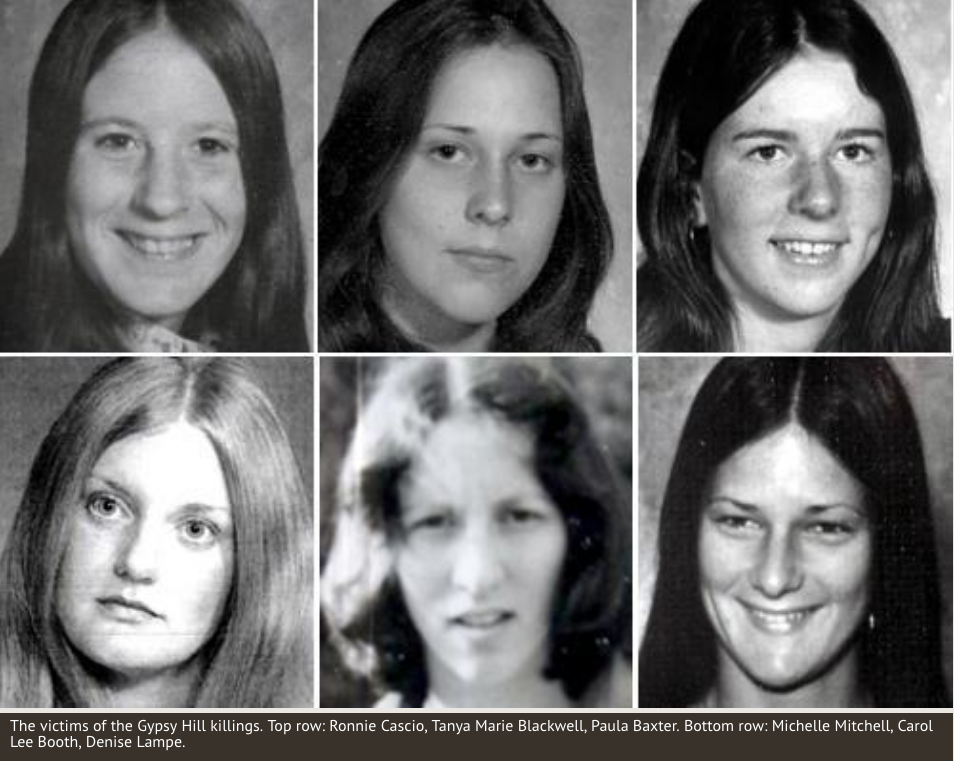 DALY CITY — For years, law enforcement officials believed the same person was responsible for the murders of five young women along the Peninsula during a terrifying, five-month span of 1976, which became knows as the Gypsy Hill killings.

Two years ago DNA evidence gathered decades earlier at two of the crime scenes resulted in two murder charges against Rodney Lynn Halbower, who had already been in prison for most of his adult life, most recently on an attempted murder charge in Oregon.

But San Mateo County prosecutors on Thursday announced DNA evidence in one of the unsolved cases led them to a second suspect, a 71-year-old man also already behind bars for a string of kidnappings and sexual assaults dating back to the 1970s.

Leon Melvin Seymour was formally charged Wednesday with murder in the death of 19-year-old Denise Lampe, who was fatally stabbed in Daly City in April, 1976.

Seymour was already in custody as an "inmate-patient" at Coalinga State Hospital, where he is being housed as a sexually violent predator for his many other kidnappings and sexual assaults, according to the district attorney's office.

"We're grateful to have the clarity that DNA evidence brings us," San Mateo County Chief Deputy District Attorney Karen Guidotti said. "Mr. Seymour can finally be brought to justice. Something he has avoided for many, many years."

There is no evidence to suggest Halbower and Seymour knew one another, according to prosecutors.

On April 1, 1976, Lampe had just finished work at Macy's at the Serramonte Mall in Daly City and returned to her car, a 1964-½ Mustang, parked between the department store and a Denny's restaurant, according to Daly City police. Lampe was supposed to meet a friend but never showed up.

More than 40 years after the death of 19-year-old Denise Lampe, the San Mateo County District Attorney's Office has charged a man with her murder.

Lampe's body was found that evening inside her vehicle at the same location in the mall parking lot.

For decades, Lampe's unsolved homicide was one in a string of five unsolved murders of young women that occurred in 1976 along the Peninsula, and a sixth with similar characteristics in Reno. In 2013, the FBI issued a press release detailing the unsolved murders, stating the possibility that one person was responsible for all the deaths.

In January 2015 law enforcement officials arrested Rodney Halbower in connection with two of the five homicides. Halbower, 66 at the time of his arrest, was serving time in Oregon State Prison on an unrelated attempted-murder conviction. Halbower was charged with two counts of murder and special circumstance of murder during the course of a rape in the 1976 deaths of 17-year-old Paula Baxter, whose body was found in Millbrae, and Veronica Anne Cascio, 18, who was found dead in her native Pacifica.

Halbower is scheduled to go to trial on Jan. 8.

DNA evidence has also linked Halbower to the killing of Michelle Mitchell, who was a student at the University of Nevada-Reno when she was found dead in Reno parking garage in February, 1976.

Following the DNA hit, prosecutors and police began working on a timeline for Halbower and determined he was incarcerated at the time of Lampe's death.

The belief that one person was responsible for all five murders was "a working assumption," said San Mateo County deputy district attorney Sean Gallagher, who is prosecuting the Seymour and Halbower cases.

"They were all very similar," Gallagher said. "The targeted ages of the victims, in how they were killed, close in time, close in geography to where they disappeared or where the bodies were found."

Blackwell was just 14 when she disappeared on Jan. 24, 1976 while walking to a 7-Eleven store located at King Drive in South San Francisco. Her body was located months later off Gypsy Hill Road in Pacifica.

Booth was 26 when she disappeared on March 15, 1976. She was last seen walking from the bus stop on El Camino Real at Arroyo Street in South San Francisco towards her home. Booth's body was located months later, hidden in brush in an open area between Kaiser Hospital and Mission Road near the former El Camino Driving Range.

In both cases, prosecutors said there is "insufficient DNA evidence" in order to identify the killer beyond a reasonable doubt.