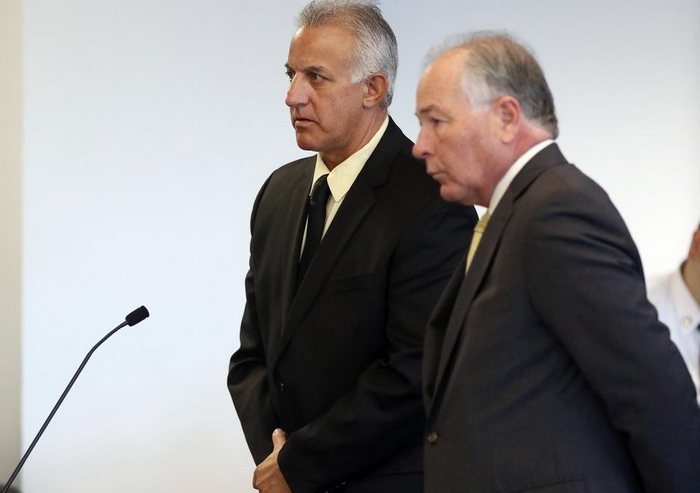 Alan Dubeshter, 56, pleaded with Middlesex Superior Court Judge Jack Lu not to send him to jail.

"I made a terrible mistake and I've owned up to it," said Dubeshter, who was in charge of the department's evidence room. "If I'm not able to work, it'll be much harder for my family than it'll be on me. I'll go to jail. I'll survive. I let a lot of people down. I'm sorry. I apologize."

Lu sentenced Dubeshter to one year in the House of Correction in Billerica, with only 30 days to serve. He doesn't have to start the sentence until Nov. 20. Dubeshter will be on probation for two years and has to pay $19,156 in restitution. If he violates probation, Dubeshter would have to serve the rest of the sentence.

Prosecutor Dean Mazzone had requested a two-and-a-half-year sentence with six months to serve and the balance to be suspended.

Dubeshter's lawyer, Michael Kelly, asked for a sentence of probation.

"He is extremely remorseful," said Kelly. "In my 34 years of practicing, I've never had a client that was more remorseful. His life has been completely shattered. Not only has he shamed himself, but he has shamed his family and he shamed the Framingham Police. Because he has lost so much, I don't think there's any more punishment needed."

Sept. 15, 2015: Police find evidence envelopes in his truck, emptied of all money

Nov. 30, 2015: Chief Ken Ferguson sends email to department informing them several officers were expected to be called to testify in front of grand jury in regards to missing money from the evidence room.

Jan. 26, 2017: Middlesex county Grand Jury indicts Dubeshter of larceny of more than $250 and using his position to secure an unwarranted privilege for himself.

March 1, 2017: Dubeshter pleads not guilty to the charges at his Middlesex Superior Court arraignment.

Nov. 7, 2017: Dubeshter changes his plea to guilty on the charge of larceny of more than $250. Sentenced to one year in the Middlesex House of Correction with 30 days to serve.

The theft from the evidence room was discovered on Sept. 18, 2015. Dubeshter was at the West Natick MBTA station when he called his wife and several friends threatening suicide, Mazzone said. Dubeshter was taken into custody and brought to McLean Hospital in Belmont to be treated.

Police searched his truck to make sure his service weapon was not inside. They found several envelopes used in the Framingham Police evidence room. The envelopes, which were empty, had been cut open from the bottom, Mazzone said.

While Dubeshter was being treated at McLean, he called several officers and confessed to the theft.

"He told them he was in trouble, that he had taken money from the evidence room," Mazzone said.

When Chief Ken Ferguson visited, Dubeshter made a similar confession.

"Unprompted, he said, 'I stole the money,'" said Mazzone.

Police found another envelope in Dubeshter's desk when they searched his home. Between the envelopes found in his truck and the one found in his home, $19,156 was missing, the prosecutor said.

The theft led the Framingham Police to audit the evidence room. They discovered more than $50,000 in additional money was missing. Mazzone said authorities can't prove Dubeshter stole that additional money.

Dubeshter's theft was a decision brought on by a tough time in his personal life, Kelly said.

"At the time these events were taking place, he was going through a divorce, he was separated from his family and he was having financial difficulties," Kelly said.

Dubeshter hoped "to make it right," by returning the money before anyone missed it, Kelly said.

Dubeshter must return to court on Nov. 20 to surrender to custody. Lu ordered Dubeshter to pay $798 a month in restitutionduring the two years he is on probation. However, the judge said, that amount could change pending a full restitution hearing.

In a statement, the city of Framingham said the department has "performed a complete review of the policies and procedures relative to the maintenance and processing of evidence and has instituted additional measures to ensure accountability and safe guard of all evidence."