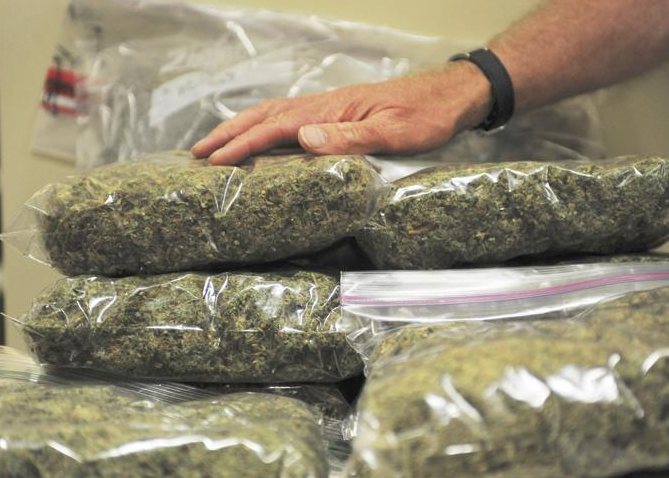 Centralia Chief of Police Carl Nielsen appeared in front of the city council Tuesday evening to further explain the results of two internal investigations into mishandled and misplaced evidence at the department's two property storage rooms.

Often referring to prepared remarks, Nielsen spent about 20 minutes walking councilors through the events surrounding an April 2018 audit and subsequent investigations that that revealed more than 100 discrepancies and resulted in the reassignment of Heather Camoza from evidence custodian to the position of community service officer.

Regarding the three handguns reported to still be intact after being recorded as destroyed, Nielsen said the guns were actually labeled "to be destroyed" and have since been dismantled. The CPD used to examine firearms seized during criminal investigations to determine whether they'd be of use to the department. Nielsen discontinued that process shortly after taking over as chief in 2015.

The chief also showed the council pictures of dried marijuana plants and samples to illustrate the difference between them and what some pictured when they read about 55 plants and 22 samples that were unable to be located during the audit and subsequent investigations.

"They're cut, they're dried, and they start losing their potency," Nielsen said. "At that stage, their value is zero. If someone tried to smoke that, they'd literally be trying to smoke weeds."

Following an Aug. 22 story published in The Chronicle, Nielsen's office received calls from members of the public asking for criminal charges to be brought against Camoza and for an independent investigation of the department.

Nielsen revealed Tuesday that Lewis County Prosecuting Attorney Jonathan Meyer reviewed a copy of the findings of both investigations and found no evidence of criminal activity.

Meyer chose to put what's commonly referred to as a "Brady" letter into Camoza's personnel file, an action Nielsen agreed with. The letter draws its name from the 1963 U.S. Supreme Court case Brady v. Maryland in which the court ruled that suppression by prosecutors of evidence favorable to a defendant violates their right to due process.

Brady letters are most often filed for officers who have knowingly been dishonest in an official capacity, but that is not the case for Camoza. Rather, Meyer wrote in part that "it has been determined Ms. Camoza's failure to keep accurate and complete records" could be interpreted as information capable of impeaching Camoza as a witness in future cases.

"The record-keeping issues that led to the investigation could call into question her credibility if she was ever called as a witness," Meyer said Wednesday. "Courts have made it very clear that if someone could look at a situation and think there could have been wrongdoing that could impact the credibility of a case or person, one has to be issued."

Nielsen said Tuesday and again Wednesday that Camoza did the best she could for as long as she could, but that she eventually found herself over her head in part because she didn't have prior experience doing law enforcement-related clerical work.

He stated at the city council meeting that she was relieved to be out of the evidence division and willingly took a demotion to the CSO role she last held about five years ago. Camoza has gone through training since being assigned and will continue to be evaluated over the next few months.

"From what I've seen and heard from her, (co-workers) have been supportive," Nielsen said. "We're fortunate obviously that nothing severe happened and that we could account for everything listed as missing. (Camoza) is a hard worker and we're going to help her as best we can with training and what she needs."

More than 20 applicants are under consideration for the open Evidence Custodian position with CPD. The job posting recently closed and a hire is expected to be made in the near future.

Nielsen closed his presentation to the city council by stating his support for reporting by The Chronicle and that while he appreciates the role the public has in holding its law enforcement officials responsible, he wants them to be fully informed before passing judgement.

"This was one of those bad things that's not something we like to report on, but the public needed to know about," Nielsen said. "The automatic response then is that someone took the dope and they're smoking it and someone should be prosecuted because anyone else would be. I get it, and I don't mind people judging my department, but it's easy to cast stones and I would hope they have all the information before they do that."

Oregon Humane Society under investigation amid accusations of mishandled evidence