A Cleveland police officer was hospitalized Wednesday morning after coming into contact with suspected fentanyl while executing a search warrant at a home in the city's North Colinwood neighborhood. 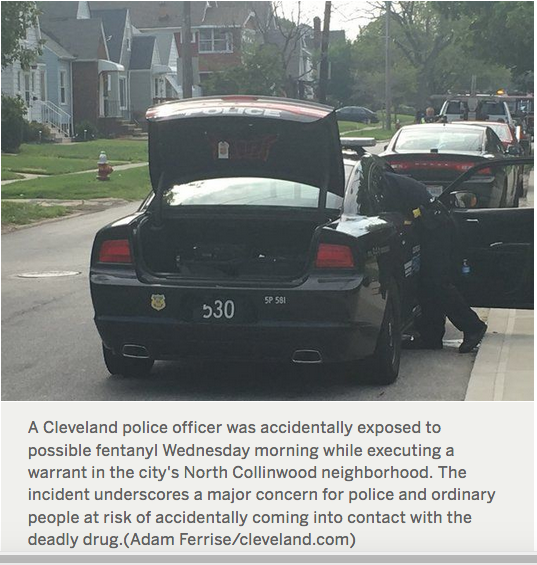 CLEVELAND, Ohio -- As heroin and fentanyl continue to kill users in record numbers, law enforcement officials in Northeast Ohio are now warning of how exposure to the drug can harm or even kill people who simply come into contact with the powerful opioids.

A Cleveland police officer was hospitalized Wednesday morning after coming into contact with suspected fentanyl while executing a search warrant at a home in the city's North Colinwood neighborhood.

If police confirm that the officer indeed came in contact with fentanyl, he would join a host of law enforcement and unsuspecting people from across the country to get ill this year by inadvertently exposing themselves to the deadly drug.

An East Liverpool police officer received four doses of Narcan after he accidentally came in to contact with fentanyl earlier this year.

Eleven SWAT officers in a Connecticut were hospitalized after they were exposed to the drug during a drug bust.

And a German Short-Haired Pointer was rushed to a Florida animal hospital after he was exposed to fentanyl during a drug raid with federal law enforcement.

The DEA warned officers, firefighters and first responders in June about just how deadly fentanyl can be if encountered during an investigation.

"Assume the worst," acting DEA administrator Chuck Rosenberg says in the four-and-a-half-minute video posted on the agency's website. "Don't touch this stuff or the wrappings that it comes in without the proper personal protective equipment."

Fentanyl is at least 40 to 50 times more powerful than heroin and a small sand grain of the drug can cause a fatal overdose. Fentanyl and heroin overdoses happen in three different ways, said Dr. Ted Parran, co-medical director of Rosary Hall at St. Vincent Charity Hospital.

The quickest way is when it's inhaled through the lungs. Second is across the mucous membranes and the third fastest is in the digestive system. The slowest way the drug can be absorbed is through the skin if exposed.

"It's all about the dose," Parran said, who is also a professor and chairperson at Case Western Reserve's School of Medicine. "Since fentanyl is so much stronger than heroin, it takes a much smaller amount of fentanyl to have the same effect of a given amount of heroin."

Officials in Cuyahoga County estimate fentanyl and heroin overdose will continue to skyrocket with as many as 775 people dying from the drugs in 2017. A record number of 666 fatal overdoes where reported in 2016.

Cleveland police Lt. Michael Connelly -- who was interviewed prior to Wednesday's incident -- said half of Cuyahoga County's overdoses happen within Cleveland's city limits, which creates a greater risk for officers to be exposed to crippling opioids.

Overdoses are handled by a team of Cleveland officers designed to focus on the opioid crisis. The Heroin Involved Death Investigators are called to every overdose to trace the drugs back to the dealer for prosecution and get users into detox.

Officers who enter homes where an overdose happens check for open windows and moving fans to prevent airborne exposure, he said. If the drugs become airborne, they can put first responders in jeopardy.

"Everybody is at risk," said Connelly, who leads the Northern Ohio Law Enforcement Taskforce. "It (opioids) easily absorbs in your system. It only takes a small amount; just a few grains of sand."

Connelly, a 27-year veteran with Cleveland police, said users don't understand the dangers they put their relatives in when they use drugs at home. Using drugs on a coffee table can put a small child at risk for an overdose, he said, citing an example.

Two children in nearby Summit County, ages 2 and 6, overdosed in separate incidents this year after coming into contact with opioids. The same happened to a 7-year-old Berea boy.

Officers usually look for spoons, needles, and straws cut in half during investigations, which alerts them of possible drug use. They wear plastic gloves, face masks and are equipped with Narcan nasal spray, a powerful drug used to reverse the effects of an overdose occurs, Connelly said.

"It's not safe for investigators," he said.

Law enforcement officials have said the bulk of illicit fentanyl consumed in the U.S. is shipped from China and Mexico. The drugs are often bought online and on the street usually rolled up in a lottery ticket, plastic bag or given to the users in their bare hands.

The powerful painkiller is usually mixed with other drugs such as heroin, marijuana and recently cocaine to strengthen its potency.

"Ten dollars is enough to kill you, if you're not careful," Connelly said, during an interview at police headquarters.

Law enforcement officials in Cleveland, Akron and DEA agents have stopped testing drugs in the field due to the increased risk of exposure. It's a recent change some departments have made since opioids made a toehold across the country.

Cleveland officers have discontinued the use of drug sniffing dogs if they are aware heroin or fentanyl drug use happened inside a home. Police are trained to administer Narcan to K-9 units. The reversal drugs have not been used on a K-9 officer, a police spokesperson said.

In Akron, officers use a secure and climate controlled room to test the drug after they leave the scene, Akron police Sgt. Michael Stott said. He encourages his officers to wear an old pair of tennis shoes during investigations and to leave them in the car, so they won't track in drug residue.

Stott said about 2,500 people overdosed on powerful opioids since 2016. Of that number, more than 250 of the overdoses were fatal.

Akron officers have traded in their latex gloves for black Nitrile gloves that were suggested by DEA officials due to their strength and puncture resistance. Cleveland is in the process of transitioning to the gloves as well.

"It's the change we had to make in order to give officers more of a safety net out there," Stott said. "Something had to be done."

As heroin and fentanyl continues to kill users in record numbers, law enforcement officials in Northeast Ohio are now warning of how exposure to the drug can harm or even kill people who simply come into contact with the powerful opioids.
http://www.cleveland.com/metro/index.ssf/2017/07/cleveland_officers_possible_fe.html
Tweet
How do you feel about this post?
Happy (0)
Love (0)
Surprised (0)
Sad (1)
Angry (0)
Tags:
altered evidence assault  kits Chain of Custody Big Three: fentanyl overdose fentanyl
Search warrant served at Purcell Police Department...
Justice Dept. Signals More Police Property Seizure...
Comment for this post has been locked by admin.