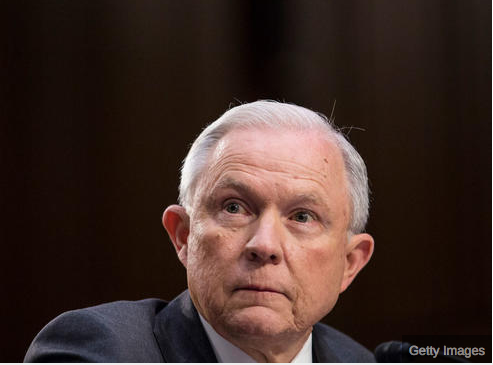 The Justice Department will soon make it easier for local law enforcement to seize cash and property from crime suspects and reap the proceeds, Attorney General Jeff Sessions said Monday.

Sessions said a shift will be announced this week that will increase the use of asset forfeiture, especially for drug suspects. The practice has been criticized because it allows law enforcement to take possessions — such as cars and money — without indictments or evidence a crime has been committed.

"With care and professionalism, we plan to develop policies to increase forfeitures. No criminal should be allowed to keep the proceeds of their crime," Sessions told local prosecutors in Minnesota.

A change would likely represent another reversal by Sessions of Obama-era Justice Department policies. His Democratic predecessor Eric Holder had tightened control of the department's asset forfeiture operations amid concerns that property could be seized without judicial oversight and without the owner ever being charged with a crime.

Holder namely restricted the ability of the federal government to take possession of, or adopt, assets seized by local authorities, who could then share in the proceeds with their federal counterparts. Civil liberties groups and some members of Congress praised the move as a step toward reform because that practice made it easier for local authorities to circumvent state laws that were sometimes stricter than the federal ones governing seizures.

Sessions on Monday said such practice — known as adoptive forfeiture — is "appropriate, as is sharing with our partners." The line drew a round of applause from the hundreds of county attorneys and law enforcement officials inside a Minneapolis convention center.

Local law enforcement agencies use forfeited proceeds to pay for expenses, and some had complained that Holder's policy left them without a key source of funding. But that policy was also designed to save federal resources for larger, complex investigations where the ability to seize assets is critical, such as cases involving national money laundering or Russian organized crime, said Stefan Cassella, a former federal prosecutor and expert on asset forfeiture and money laundering law.

"It's a great way to build teamwork by adopting the cases and sharing the money," Cassella said. "But at the same time, not everything can be a priority."

The Justice Department sees the assets forfeiture program as a way to strip suspects of the proceeds of their activities, to deter crime and to compensate crime victims. An effort to expand it is in keeping with Sessions' tough-on-crime agenda, which he continued to espouse during Monday's speech.

He again implored prosecutors to pursue the toughest punishments against most crime suspects, echoing a directive he issued earlier this year to U.S. attorneys. He reiterated his top priorities: cracking down on illegal immigration and quashing violent crime. Sessions stressed the need to tackle gang activity, pointing to cities such as Minneapolis, where data show a recent uptick in violent crime. And he encouraged prosecutors to go after drug offenders, because "drug offenses are not nonviolent crimes, as most of you all know."

Mike Freeman, the top prosecutor for the Minneapolis area, said he disagreed with the attorney general's approach on drug crimes and with his portrayal of crime in that city, calling it "a blip."

"Our plates are full. We prosecuted about the same number of murders each of the last five years," Freeman said.